"Speed is the only protection this vehicle provides; it is unarmored, noisy, and prone to roll-over. It demands a level of skill from its operator that is impossible to expect...during combat conditions."
—Anonymous E2-BAG/1/7 serviceman[1]

The M274 Ultra-Light All-Terrain Vehicle[2][3] (abbreviated M274 ULATV), commonly known as the Mongoose, is a United Nations Space Command light ground reconnaissance vehicle. The Mongoose lacks weapons, but can carry a driver and a passenger. The passenger can fire their weapon, but they will not be able to zoom in.

The M274 Mongoose ULATV is one of the fastest and most maneuverable ground vehicles in the arsenal of the UNSC Marine Corps. It is a highly effective vehicle for reconnaissance, rapid transportation, swift tactical versatility, and for shooting between positions. A smaller cousin to the ubiquitous M831 Troop Transport, the Mongoose is a small ATV capable of carrying a driver in the middle of the vehicle, and features a rear platform that can be used to carry one additional passenger. Because it carries no armament of its own, having a passenger is usually essential if engaging in a combat zone. Due to its smaller size, the Mongoose is a difficult target for both slow and fast moving enemy weaponry, as opposed to the Warthog, whose size is somewhat substantial. However, one should note: It's a common misconception that this ULATV is faster than any other ground vehicle in Halo 3, when the M12 LRV Warthog is actually faster (this is due to the different camera angle between the two, as well as the Mongoose's better acceleration).

The Mongoose's high speed, light mass, and practically non-existent armor make it unwieldy and difficult to control at high speeds and/or over unstable terrain, making the ULATV vulnerable to destabilization, crashes, and flips. To make matters worse, the design of the vehicle and it's lack of armor leave both the driver and passenger completely exposed. Furthermore, the Mongoose does not incorporate any offensive or defensive capabilities, making the Mongoose's only practical defenses an armed passenger and it's speed. Thus, the standard UNSC Marine Corps operating protocol in engagements against Covenant forces is to place a M41 Rocket Launcher-armed Marine in the passenger position to fire rockets against slow-moving hostile vehicles, while the driver uses the Mongoose's superior speed to evade enemy return fire. In a last resort situation, the Mongoose can be used to run over nearby enemies. Yet, attempting a splatter is usually an ineffective plan: The low width and height of the vehicle, combined with the aforementioned instabilities when driving, make it very difficult to successfully score an impact on an opponent.

For quick and practical deployment, the Mongoose can be transported by the Pelican dropship or the Behemoth-class Troop Transport (Elephant). Additionally, the AV-14 Attack VTOL appears to have a winch capable of transporting the ULATV, but it is not seen used during gameplay.

Finally, this vehicle is considered to be analogous to the Covenant Type-32 "Ghost" Rapid Assault Vehicle, despite the offensive, defensive, and performance differences.

The Mongoose is operated by a single driver, situated in the middle of the vehicle. Once a driver is in place, the ULATV accelerates rapidly, and can reach a top speed of 60 MPH. The high acceleration and high top speed available on the vehicle proves a vital advantage while trying to "splatter" enemies. However, the Mongoose's excessive maneuverability often makes it quite difficult to splatter enemies: A head-on, full-velocity impact on a shielded enemy is needed to deliver sufficient force to kill.

The lack of weaponry mounted on the Mongoose makes the presence of an armed passenger often essential in combat zones. Engagements with enemy infantry or vehicles are often inadvisable in the absence of a passenger armed with heavy weaponry; the Mongoose's extreme speed and maneuverability makes it best zoom through enemy lines. The Mongoose's speed and acceleration makes it almost impossible to hijack[4].

The Mongoose's lack of personnel-protective armor, however, makes the driver, and especially the passenger, vulnerable to enemy fire, especially from medium-long range weapons such as the BR55HB SR Battle Rifle. Although the Mongoose's maneuverability makes it difficult to destroy with heavy weapons such as the M41 Rocket Launcher, the Mongoose is vulnerable to the Spartan Laser; despite the Mongoose's high speeds it is extremely easy to track with the Spartan Laser since the Mongoose cannot reach speeds to make tracking difficult. The Brute Shot is also very effective, if you hit the Mongoose, it will send it about two of three meters flying the direction you shot at. Furthermore, in close-range engagements against a Mongoose, it is easy to stick or melee the operators.

Despite the Mongoose's acute vulnerabilities, its light mass and small profile give it interesting applications: it is possible to launch the Mongoose safely off of a man cannon (albeit with mixed results), and the Mongoose can allow a driver "lowride" in one; to drive by balancing on the back two wheels[5][6].

Unfortunately, this light weight can also be the player's downfall. Explosives as weak as the explosion from some equipment are strong enough to flip it, and when fighting Flood Infection Forms, the Mongoose isn't heavy enough to pop them (the Mongoose will simply drive over the Infection Forms, leading to a bumpy ride that usually flips the player).

The Mongoose was originally intended to be put into Halo 2, but was eventually canceled.[7] The Mongoose prototype did not fulfill Bungie's expectations for Halo 2, and although Bungie attempted to add dual coaxial machine-guns to it or an armed passenger, it remained unbalanced and didn't fit into the gameplay. Bungie at the time could not figure out a way to implement it into the campaign, and had trouble getting the physics for it right, stating that the whole thing had a tendency to flip very easily, and gameplay wise, had no purpose as it couldn't be driven with the flag and became virtually useless. The addition of the passenger seat gave rise to whole new possibilities and lead to its inclusion in the third game. Other Warthog-related vehicles proposed in Halo 2 were also not featured in the final game.

The Mongoose was also featured at the end of the 100th episode of the popular machinima series Red vs. Blue. Sarge called over Simmons and Grif to help him name the new ATV he created from "old Warthog parts we had lying around", which happens to be a Mongoose. This is mainly notable because this episode was shot using Halo 2, where the Mongoose did not appear legitimately. This was done by a silhouette picture put in the background, a common special effect in machinima. It is also used in Reconstruction as the vehicle of choice for Recovery 6 and Recovery 9, as well as Agent Washington, Church, and Caboose.

An early Halo 2 prototype of the vehicle. 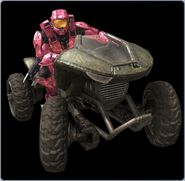 A red SPARTAN on a Mongoose.

Master Chief and Arbiter teamed up and on a Mongoose. 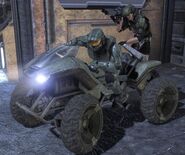 The Mongoose's light weight renders it capable of being launched from a man cannon.