Built contemporaneously with the construction of the Halo Array, Sentinels were utilized as all-purpose workers and guards on Forerunner stations. Following the construction of the Halo Installations, Sentinels were reconfigured to be the first line of defense against Flood outbreaks and other external intruders. The mechanical nature of the Sentinels make them ideal combat units against an enemy that could convert conventional biological infantry into biomass - by deploying the Sentinels en mass, the Forerunners could battle the parasite without contributing to its numbers. Controlled by their own basic AI functions, as well as their Installation's Monitor, Sentinels patrol the Halo rings tirelessly and attack as their protocol demands.[1]

When not in combat Sentinels serve as basic repair, maintenance and security drones for Forerunner installations and facilities where Flood samples are kept, working in conjunction with Constructors and Enforcers to ensure that the facility remains in working order. Sentinels are viewed by the Covenant as "Holy Warriors of the Sacred Rings,"[2] machines meant to be worshiped and respected by all who believe in the path.

Sentinels are grayish white in color and have two arm like appendages with two grapple fixtures at the end of each arm and a central "head," curved undercarriage containing an offensive Sentinel Beam. The form of a Sentinel may differ depending on the situation of their Installation. Their powerful offensive beam weapons and defensive energy shield make them very effective in combat against intruders or foreign objects that present themselves as threats. Their smaller lasers are used for both repairing damaged Forerunner constructs, and self-repair should the Sentinel be damaged in combat.[1] Sentinel's are propelled by both an anti-gravity unit located on the undercarriage and small engines on the back of the unit, they are capable of traveling at high speeds but cannot sustain long range travel.

The Forerunners refer the Sentinels as "our very basic countermeasures," and are the first automated defense systems to assist a situation and generate a proper response protocol. While Sentinels are strong enough to handle a situation they are, however, more of a supplement rather then a reliable combat system. The Sentinels weapons system are limited and not as powerful as some of the other Forerunner weapons employed against the Flood, and can only hold them at bay for a limited amount of time.

Because of their limited A.I, they are only able to handle situations on a basic scale, which makes them vulnerable to strategic Flood attacks. Because of their limited intelligence they are not often able to perform evasive maneuvers when facing imminent attack and are usually destroyed. In large overwhelming numbers Sentinels are more than capable of handling a situation for a certain time until more permanent measures can be applied.

The Sentinels energy shield is the primary defense mechanism, once taken down the Sentinel is susceptible to any type of small arms fire. When the Sentinel has been damaged beyond repair the Sentinel explodes violently and releases a powerful EMP blast. This EMP blast is a strategic last resort, as the EMP blast will disable any nearby electronics, including any weapons the enemy may be using.

Sentinel Majors are larger, more powerful Sentinel models used for heavy combat situations. They provide backup for Enforcers in the event of a massive Flood outbreak or attacks on the Halo Installations.

Essentially heavy Sentinels, Enforcers are equipped with a variety of offensive and defensive weaponry, including Heavy Needlers Missile Projectiles, Sentinel Beams, and duel Energy Shields covering both their top and bottom halves. They are designed to handle major Flood outbreaks but are also capable of defending their Halo Installation from external threats.

Onyx Sentinels both guard and make up the Shield World of Onyx. Onyx Sentinels are far more formidable opponents for a variety of reasons.

Roughly similar in appearance to regular Sentinels, Protector Sentinels occupy varying roles from healing or shielding other units to offensive capabilities similar to other sentinels.

Strato-sentinels are massive machines, used to construct large-scale installations including the Halo Array.

In Halo 2, Sentinels, at one point, operated automated facilities, such as Threshold's Gas Mine, for "untold centuries". Evidence of this remains; some Sentinels have been seen repairing Covenant vessels as the Arbiter enters the main hangar with the Seraph fighter, a Sentinel fires a green beam at the Seraph -- the same beam as the ones used by Constructors in Sacred Icon.

Sentinels in Halo 3 are also seen on the Ark and aids the Chief as he makes his way towards the cartographer After the death of 343 Guilty Spark the Sentinels once again become an enemy. A different variant of Sentinels have also been seen on Onyx; and serve as a shield to protect anything without proper clearance from getting near the Shield World.

In Halo Wars, they serve as backup units that can be built at a Sentinel Shop along with Super Sentinels. They cost 100 resources each.

A Sentinel in Halo: Combat Evolved.

A Sentinel's shielding as seen in Halo: CE. 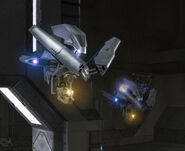 A pair of Sentinels in Halo 2.

A close up of a Sentinel, circa Halo 2