Looking for 343 Guilty Spark, the Monitor of Installations 04 and 04B?

The Battle of the Containment Facility

This level takes place on Installation 04, in a Flood Containment Facility. The first chapter of the level is set in a swamp and the second chapter, "The Flood" is set in the Alpha Halo containment facility. The third chapter is outside the containment facility. In this chapter, John-117 is dropped from Echo 419 to search for Captain Jacob Keyes who has been out of contact for over 12 hours. Soon, John-117 stumbles upon a structure and ventures within it, only to find out that the Marines accompanying the Captain have been slaughtered by an unknown force. After realizing the fate of the Marines, John fights his way out to the swamp and encounters a questionable ally.

Camera flies over a group of Kig-Yar and Unggoy running through a swamp, panicky and obviously in retreat. As it pans over them, the player sees through the fog and rain the outline of a dropship, which further materializes as the camera draws closer.

In certain parts of the level, the player can hear a radio transmission coming from a crashed human dropship and a Covenant communications terminal. As it repeats, it seems that this is some sort of distress beacon. Static pervades the transmission, and the signal fades in and out of clarity.

John-117 quickly finds the crashed dropship sending the message. There are weapons and supplies piled nearby, but no signs of life. He passes by a crashed Covenant Spirit and deals with a small group of Unggoy and Kig-yar, and crosses a log bridge. As he moves across the bridge, he sees several shadowy figures running around on the top of the cliff to the right. Also, his motion tracker shows seemingly friendly units in the swamp not too far from his location, but they suddenly disappear off radar.

When he reaches the other side, he hears Assault Rifle fire nearby. He investigates and sees a mob of Unggoy and Kig-yar fleeing from an A-shaped structure. A frag grenade explosion throws a Shade turret around. The fleeing Covenant attack him out of fear.

John-117, thinking Marines are attacking the Covenant, hurries to the entrance, but finds no one there. A lift arrives for him. He takes the lift down into the depths of the structure.

John-117 passes through several large rooms and many smaller ones inside the structure, filled with Unggoy, Kig-Yar, empty Shade turrets, discarded weapons, and dead bodies - both Marine and Covenant. In some rooms, Kig-Yar and Unggoy gather at the doorways as if expecting an attack. In one room, John discovers a strange green-yellow substance falling from the ceiling.

As John-117 comes into an area blasted with gunfire and scorch marks, there is the sound of shattering glass. A lone Marine sits leaning against a wall, Pistol pointed at you. He shoots at John if he comes too close, while screaming at the top of his lungs the following phrases. He also fiddles around with his pistol a lot, checking to see if the magazine is full.

John-117 leaves him, and finds a way to the second floor. An Assault Rifle lies on the ground, pointing like an arrow towards the entrance of a room marked with ominous red Forerunner glyphs. The door appears to have been forced open. John goes in, passes a dead Marine, and walks down a ramp.

As you come down one of two ramps on either side of a door which has been recently opened by a UNSC spoofer.

John-117 approaches the door cautiously and listens for any movement inside. Just as he was going to type a command into the spoofer, there is a noise behind him. He turns around, gun ready to shoot, but sees nothing. After a moment, he turns back to the door, places his gun on his shoulder and opens the door. When it opens, a dead Marine falls into his arms. He advances a few paces, places the body on the floor gently while making sure nobody follows him through. He sweeps his Assault Rifle about the room. The floor is covered in blood. Discarded UNSC weapons lie all about. John-117 also notices a helmet lying on the floor, and, crouching, moves swiftly towards it. Once he's there, he surveys the room one more time, places his rifle on the floor, and picks up the helmet. The name JENKINS is stamped across it. There is a large, jagged hole punched through the top of it. John-117 shakes his head. He then examines the helmet more closely and notices that the Helmet recorder, near the HUD, is still intact. He retrieves the Recorder Chip and inserts it into a socket in his helmet (where Cortana was previously stored).

Helmet cam view (night vision enabled). A Marine (Jenkins) looks around the inside of Dropship V-933. There are several other Marines seated in the dropship with him. Johnson's favorite music (flip music) blares over the cabin speakers.

The Squad advances through the swamp towards the same structure you are in now.

They reach the entrance and sweep their weapons across it, wary.

Mendoza advances in a crouch, gun at the ready.

The team heads into the structure.

The squad stands around a Sangheili carcass, the chest is torn wide open. Private Kappus is examining a similar carcass on the left hand side of the screen.

The squad, along with Captain Jacob Keyes and his own squad, stand outside a locked door - the one you have just come through.

Kappus removes a Spoofer from his pocket and sticks it to the door. He punches a few keys, and the door opens. He waves the squad through. Bisenti takes point through the door, Jenkins close behind him, and the rest of the squad fans out around him. An odd rumbling sound is heard.

The same noise that John-117 heard before entering the room is heard.

Everyone scans the room, trying to find the source of the strange sounds.

Mendoza points to a nearby door, which has just exploded outwards. Small squid-like creatures swarm from it.

Riley lies on the ground, one of the Infection Forms attached to his chest. Kappus tries to pull it off him.

Kappus pulls the creature off of Riley, who goes limp. Kappus struggles with the creature which is now trying to infect him.

The Marines and Captain Jacob Keyes open fire, to little effect. Infection Forms are now all around them.

The Marine squad is overtaken, still firing, while their blood sprays as Infection Forms continue to crawl onto them.

Several Infection Forms attack Jenkins and block his helmet cam. After a moment the screen blacks out. Words flash.

John-117 removes the chip from his helmet, shakes his head, and tosses the chip to the ground. The noises begin again. He stands quickly, gun ready.

The door John-117 came through is now locked. Three doors holding dozens of Infection Forms break open one at a time, their inhabitants attacking him.

John-117 tries to take the elevator he entered with, but while he waits for it to come down, it suddenly falls down and crashes down to the bottom of the facility.

After some fighting, John-117 arrives at another elevator, but it goes deeper underground and Unggoy blood is seen painted on the elevator's shaft. At the bottom of the shaft, he's attacked by armed Combat Forms - both Sangheili and Human. This detour forces him to fight his way back up.

Although their weapons give them a distinct advantage, a single Infection Form or a single Combat Form attack can kill them.

If they survive, they hold their position inside the room.

As John-117 reaches the final elevator and rises to an exit from the structure.

John-117 reaches the top where a group of trapped Marines is holding out.

It is obvious they used a lot of ammo to escape, and it is all stacked in a pile. Most Marines hold Shotguns and Assault Rifles, one or two have Plasma Rifles.

The Marine squad eagerly follows John-117 outside, where the Flood close in from all sides. Some Marines are attacked by Infection Forms, and their allies are forced to shoot them. If you lead them, they all may survive, but this is rare. Corporal Lovik will most likely survive, being that he is a Corporal, has slightly higher health.

As John-117 comes near the tower Foehammer was speaking of, an odd blue object and a flotilla of floating robots descends from the mist. The robots begin to slice away at any nearby Flood, avoiding your Marines. After a few seconds of fighting around the base of the tower, the screen fades to white.

John-117 suddenly finds himself enveloped in a bright gold light, and then appears on top of one of the legs of the tower. The blue object hovers in front of him. John instinctively points his weapon at it.

John slowly lowers his Assault Rifle. Gunfire is still heard below, and bright beams slice through the dark swamp. John and the Monitor ignore the commotion.

John-117 and the Monitor vanish in another series of gold flashes.

John-117 inside the forerunner structure

A room inside the forerunner structure in Halo: Combat Evolved Anniversary

Another picture of the swamp in Halo: Combat Evolved Anniversary

A skirmish between Unggoy and Kig-Yar, and flood infection and combat forms in Halo: Combat Evolved Anniversary

John-117 approaches the locked door.
Add a photo to this gallery 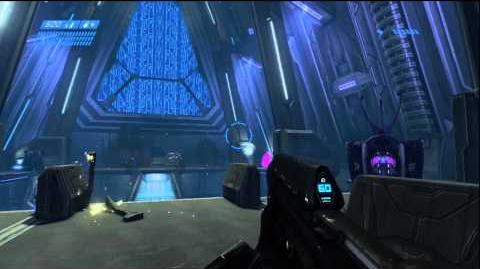 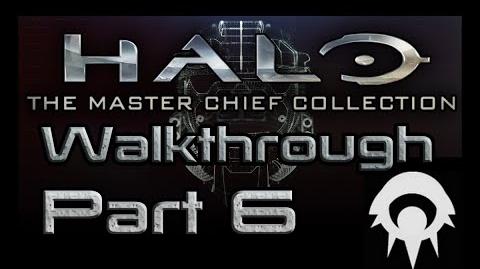 Halo-343 Guilty Spark Walkthrough
Add a photo to this gallery

Retrieved from "https://halo.fandom.com/wiki/343_Guilty_Spark_(level)?oldid=1814726"
Community content is available under CC-BY-SA unless otherwise noted.