Were you looking for the HORNET Mines - A type of UNSC nuclear ordnance?

The AV-14 Attack VTOL, also known as the Hornet, is a United Nations Space Command assault and reconnaissance Aircraft. The Hornet is capable of fulfilling multiple combat roles from close air support to special forces insertion.[1]

The AV-14 Hornet first entered service during the UNSC's campaign against the Insurrectionists.[3] It played a big part in Operation: TREBUCHET and was used to provide support to infantry on the ground and to insert strike teams into combat zones.

Two Hornets were used during a raid on Tribute in 2524 when two teams of special forces were inserted into a hot zone and safely retrieved an Insurrectionist with information regarding the rebels' method of making explosives.[4]

The AV-14 Hornet remained in service during the Human-Covenant War,[3] serving in both the Battle of Arcadia,[5] Battle of Earth, and Battle of Tsavo.[6] Hornet formations deployed strike teams and provided support during the Battle of Cleveland.[7] During the assault on the Forerunner Citadel, it was the primary method by which John-117 traveled.[8]

Some AV-14s continued service into the Post-war galaxy. Some participated in the Battle of Draetheus V.[9] Others remained as patrol craft for surviving colonies.[10]

The AV-14 is a vertical take off and landing aircraft (VTOL) that has been in service since at least 2424 and has played a role in multiple campaigns starting with Operation: TREBUCHET.[1][3] It serves as the UNSC's Assault, Search, Reconnaissance, and Close Air Support Aircraft. The Hornet is an atmospheric only craft and as such cannot be deployed by orbital vessels unless a ship rated for atmospheric entry can deliver it to the battlefield. It is easier for the Hornet to be deployed from an air base located on the surface than from a ship.[citation needed]

The AV-14 Hornet consists of a one-man cockpit and a rear section, extending approximately one meter backward. Variant models feature a tandem seating configuration, presumably allowing a second passenger to operate the aircraft's weaponry or navigation systems.[11] At the top of this rear section are a set of wings with turbofan engines mounted on gimbals at the ends, providing the Hornet's main source of propulsion. The front of the Hornet contains a target acquisition and designation system which includes cameras and sensors. On each side of the cockpit is a jump-seat extending backward that doubles as a landing skid. These skids allow up to four passengers, though the additional weight runs the risk of overloading the aircraft.[4]

Although the AV-14 Hornet serves primarily as an attack craft, it can be reconfigured for a particular role. Variant models include the AV-14 Reconnaissance and the AV-14 Transport[12] and dependent upon mission requirements can be customized accordingly.[13]

The AV-14 Hornet is armed with both anti-infantry and anti-vehicle weapon systems. The AV-14 Hornet can be configured with one of two anti-infantry systems. The first are a pair of high-mounted GUA-23/A Heavy Autocannons,[1] located on either side of the cockpit, which can be elevated and depressed to a small degree without affecting the flight pattern of the Hornet. The second is a single, nose-mounted GUA-23 Linkless Feed Autocannon that fires .50 BMG rounds.[14][15] The anti-vehicle system is composed of a Class-2 Guided Munition Launch System consisting of twin missile launchers mounted on the belly of the aircraft's landing skids. When triggered, each pod fires a single homing missile.[1] In addition, the Hornet can be armed with two chaff pods to counter radar-guided missiles. When activated, they release copper nickel-coated glass fibers or silver-coated nylon fibers having lengths equal to half of the anticipated radar wavelength.[14]

While the AV-14 Hornet has a wide variety of roles and advantages, its greatest weakness is its light armor — making it susceptible to anything larger than small arms fire.[3] Infantry atop of the vehicles landing skids are also at risk of taking enemy fire, as they have no protection at all which is why the AV-14 Hornet is often used to insert small strike teams, and not extract them during combat operations.[15][16]

The Hornet in Halo Wars is the mainline UNSC aircraft and is capable of engaging both ground and air targets. It can be built at the Air Pad for a cost of 250 resources and 2 population with a minimum tech level of 2. It has several upgrades:

The Hornet is only used in the multiplayer portion of Halo 2: Anniversary. Just like in previous games, the Hornet is good for transporting team mates quickly and easily. However, it is relatively weak, with only a small fall being able to get it smoking.

In Halo Wars 2, a modified version of the original Hornet, known as the AV-14B Attack VTOL[17], is used instead of the original AV-14 Hornet. Changes to the AV-14B model are not specified, but they claim that they will "give the UNSC an edge over the Banished".

An early Hornet concept, with a gunner being placed on the back. This idea was later abandoned.

Image of the AV-14B Hornet on its card in Blitz Mode in Halo Wars 2.

A transparent render of a Hornet in Halo 3.

Another render of a Hornet from Halo 3.

The snow-camouflaged Hornet on the map Avalanche.

The Hornet as seen in Halo: Spartan Assault.

The Hornet in Halo Wars. Note the large chin-mounted gun.

Another view of the Hornet in Halo Wars.

A Hornet on the verge of destruction.

A close up of a Hornet's propulsion system while active.

A Hornet as it flies in the Halo 4 multiplayer map Skyline.

The Red Hornet made by Mega Bloks 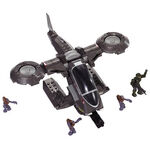 The Mega Bloks set of the Hornet