United Nations Space Command
You could also be looking for HORNET Mines - A type of UNSC nuclear ordnance.

The Hornet is a vertical take off and landing vehicle (VTOL) that has been in service for over 28 years and serves as the UNSC's rapid assault and reconnaissance vehicle. The Hornet is an atmospheric craft and as such cannot be deployed by orbital cruisers unless a ship rated for atmospheric entry can deliver Hornets to the battlefield; nevertheless, it is easier for Hornets to be deployed from an air base located on the surface than from a ship. The Hornet is slightly larger than the Covenant Banshee[2] and lacks the evasive maneuvers and speed of the Banshee, but unlike the Banshee, the Hornet can remain stationary in the air.

The Hornet consists of a one-man cockpit and a rear section, extending approximately one meter backward. At the top of this rear section are a set of wings with what appear to be advanced turboprop engines mounted on gimbals at the ends, providing the Hornet's main source of propulsion. The front of the Hornet contains a target acquisition and designation system, along with cameras and sensors.

On each side of the cockpit is a jump-seat extending backward that doubles as a landing skid. These skids allow up to four passengers[3]. The Hornet features both anti-infantry and anti-vehicle weapon systems, increasing the vehicle's battlefield utility. The anti-infantry system is composed of two triple-barrel fire-linked rotary cannons. These are located on either side above the cockpit on the leading edge of the wing. The guns fire synchronously, and can be elevated and depressed to a small degree without affecting the flight pattern of the Hornet. The anti-vehicle system is composed of two Class-2 Guided Munition Launch Systems, belly-mounted under the port and starboard skids. Upon activation, each pod fires a single missile. Like the Missile Pod support weapon, this system is capable of achieving a target lock, although the tracking system in the Hornet's missiles is slightly inferior. Given the Hornet's maneuvering characteristics and loitering capability, it is an excellent anti-vehicle unit.

The controls for the Hornet appear to be similar to those of a helicopter, suggesting that as turbine-driven VTOL craft became more practical, they replaced helicopters. Although the Hornet primarily serves as an attack craft, like most UNSC hardware it is flexible, able to serve a support role or to escort larger UNSC crafts if needed. The Hornet is very resistant to small arms fire; however, the M41 Light Anti-Aircraft Gun mounted on the Warthog is capable of inflicting heavy damage upon it. A Gauss cannon can destroy a Hornet in three consecutive hits. Wraith mortars and Scorpion rounds are both one shot kills.

The AV-14 Hornet is known for its efficiency in combat situations; its multi-purpose role allows for a wide array of tasks the AV-14 can perform without any major problems. In its role as an attack craft the AV-14 is very effective at hunting down and destroying armor with relative ease; the Class-II GMLS can take down the toughest Covenant armor in only a few strikes, making it the UNSC's prime choice for hunting down tanks. Its ability to engage infantry also makes the AV-14 both an offensive and defensive aircraft; the triple-barrel rotary cannons can take down heavily armored and shielded targets with little effort, and its ability to place itself in a stationary position to lay down cover fire while a larger craft retrieves fellow infantry also allows it to perform its role as a support craft. The firepower on the craft is also an added bonus when escorting other aircraft into dangerous territory that could be susceptible to ground fire. Its role as a support craft is further bolstered by its ability to easily insert small strike teams into combat situations.

While the AV-14 Hornet has a wide variety of roles and advantages, its greatest weakness is its small size and armor. Because the AV-14 is so small, its armor is light, and the craft can easily be taken down by Light Anti-Aircraft Guns, and high velocity cannons can shred the AV-14 to pieces with only one strike. Passengers on the AV-14 have no protection at all, making them easy to hit by accident or design, and must be tied down to the vehicle or risk falling to their deaths should a major problem arise. Because of this, the AV-14 is mostly used for inserting strike teams, and not extracting them, as the vulnerability of the AV-14 and the high risk of casualties mandates that larger, more heavily armored crafts like the Pelican be placed in combat situations for extracting UNSC personnel.

The Transport Hornet is exclusive to the multiplayer maps Avalanche and Sandbox, appearing only on the latter through Forge. This variant of the Hornet is camouflaged in a grayish-white. Its missile pods have been removed and the cannons' rates of fire and power have been decreased, shifting the Hornet from an aggressive assault vehicle to a more conservative air support/transport unit.[4] The Snow Hornet on Avalanche has been used as a very effective transport vehicle for teams during objective games. It has also been noted to be slightly faster than its normal counterpart, to make up for the slow rate of firepower, making it opportune in situations that require quick transport.

The Hornet is extremely effective in Halo 3 if used correctly. In Campaign, the Hornet dominates all battles it enters with its accurate and effective rotary cannons, as well as its guided missiles. While in Matchmaking on Avalanche, however, the Hornet has no missiles, the rotary cannons have a slower rate of fire, and moves slightly faster. Thus, it remains a great transport and support vehicle, and can change the face of a battle if used properly. The following are a list of tips for both pilots and troops riding on the jump seats of Hornets.

The Hornet makes an appearance in Halo Wars as the main-line UNSC aircraft. It can be built at the Air Pad for a cost of 250 resources with a minimum tech level of 2. It takes 2 population slots. It is capable of engaging both ground and air targets but is susceptible to anti-aircraft fire; it has several upgrades making it more versatile against ground units:

An early Hornet concept, with a gunner being placed on the back. This idea was later abandoned.

The snow-camouflaged Hornet for Avalanche.

A Hornet in the verge of destruction. 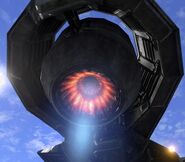 A close up of a Hornet's propulsion system while active.

The Hornet in Halo Wars. Note the large chin-mounted gun.

A squadron of Hornets supported by a Sparrowhawk.
Add a photo to this gallery

Retrieved from "https://halo.fandom.com/wiki/AV-14_Attack_VTOL?oldid=987414"
Community content is available under CC-BY-SA unless otherwise noted.