Abandon, also known as War Games Map_Set/: 505-2[1] is a multiplayer map for Halo 4. It is set on an abandoned UNSC science facility on a planet known as Erebus VII. This asymmetrical, close-quarters map allows for up to eight players and is designed for objective game types.[2]

Abandon is an asymmetrical map that has two bases for both teams. Red Team spawns towards the closed side of the back (known as Back Gold), and Blue Team spawning at the cliff side (known as Beach). Both teams receive a Needler ordnance drop, and a neutral Scattershot spawns at the bottom center of the map (known as Ring 1).

The 'Purple Forest' can be characterized by blueish-purple lights on the trees. When looking from Blue Spawn, Purple forest is on the right side. On the left side is 'Grey Forest', which is characterized by the grey color of the surrounding area. 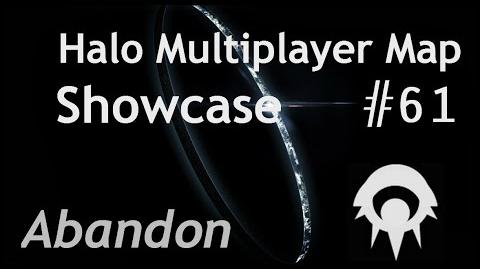 The unidentified aliens in abandon

The Callouts for the map