This article describes the cloaking technology. For other uses, see Camouflage (Disambiguation).

The term Active Camouflage (often shortened to Active Camo and sometimes invis or av-cam[1]) refers to various light-bending technologies, both UNSC[2] and Covenant. Most commonly, the term is applied to Forerunner-developed cloaking equipment that is generally stored in small, deliberately fragile containers.

In Halo: Combat Evolved and Halo 2, it is stored in a small, glass-like pyramid. In Halo 3, it is suspended in a spherical force-field. A person can use the light-bending energy by merely coming into physical contact with the container, which will cause it to break and release its contents. Upon release, the energy envelops the wearer and bends light around their skin, armor, or shielding, conforming to their form and rendering them almost invisible. However, there will be a very faint outline of the player along with a distortion of the image. At that point, the energy will gradually dissipate and wear off, slowly revealing its user.

The effect lasts only for ten seconds, and only prevents visual detection; those using Active Camo can be observed by other means, including motion tracking, noise, and environmental disturbances (such as footprints on soft terrain). If a player also has an overshield, the yellow lines will still be visible, allowing an alert player of someone there. In Halo 4, players and enemies using active camo can be seen if Promethean vision is activated, in this case a player will appear red to the user.

Being a Forerunner device, it is (re)discovered by the Covenant and as such, Active Camo is most commonly used by Special Operations Sangheili, Stealth Sangheili, and Jiralhanae Stalkers. However, all varieties of MJOLNIR armor that are Mark V and beyond can use it.

Active Camo will easily cloak its user and the weapon they are wielding, this visibility is different per game. The Energy Sword in Halo 3, 4 and Reach is completely cloaked, but this is not the case during Halo 2 or Halo: CE.

Though Active Camouflage is quite effective from a distance, it can faintly be seen if an observer is close enough to the wearer. However, it is difficult to spot a camouflaged opponent from a distance using a scoped weapon—actual physical proximity is required to reliably spot a person using Active Camo. It should be noted, though, that Active Camouflage does not mask environmental effects such as footprints, meaning that it is not as effective on soft terrain (such as the snow found in Halo 3's Snowbound and Avalanche Multiplayer maps).

Technically, Active Camouflage is not quite invisibility, though it is very similar. Rather, it is the term that is used to describe a broad range of technologies that allows a wearer or object to blend in with its terrain, mimicking the environment around it perfectly, though in two dimensions. There are a variety of ways to do this, though the UNSC uses photo-reactive panels on its Semi-Powered Armor and prowler warships for optical camouflage, adapting to account for movement.

Though it has never been elaborated on in detail, it is suspected that Covenant versions of the concept use phased array optics to project a three-dimensional hologram of background scenery around the wearer of the system, effectively bending light, a task well within the Covenant's tier two technology level. The technology can be utilized on Human armor systems, such as the MJOLNIR armor, but the UNSC has only developed a rough equivalent, the Camouflage cloak.[3]

Talc powder and other atmospheric particles can disrupt the systems, causing the technology to overload and fail.[4] The device also generates a considerable amount of heat, causing its user to be clearly visible on Human thermal goggles and some variations of the Sniper Rifle.[5] The humans of Alpha Base on Installation 04 used this advantage when their base was infiltrated by stealth Sangheili, equipping their Fire Teams with infrared goggles allowing them to easily see the attackers. In addition, William-043 and Kelly-087 employed talc powder in order to overload the camouflage on Reach in order to find them.[4]

The UNSC has developed various technologies to conceal a soldier or any object from view. The most common form of this technology operates on a different principle than the Covenant active camo, using photo-reactive panels to impersonate the surrounding environment like a chameleon. A device known as the Camouflage cloak can hide the wearer's infrared signature, beside serving as a form of camouflage. However, UNSC camouflage technology is inferior to Covenant active camouflage in many respects.

The Semi-Powered Infiltration armor used by the Spartan-IIIs utilizes photo-reactive panels to conceal the wearer's infrared signature and to blend in with the surrounding environment. When combined with their natural talent and training for stealth, it can be a very effective tool. Some Headhunters use a prototype camouflage almost identical to the Covenant version, rendering them almost invisible, except that it only lasts 3–5 minutes and other systems have their power drained while it recharged. This feature was tested by ODSTs and saw only very limited use in 2552.

Much like the SPI armor, UNSC prowlers use ablative panels or "active camouflage skin" to conceal themselves from view in addition to masking their heat signatures. This camouflage isn't perfect however, and cannot keep up with a constantly changing background such as a gas giant's atmosphere.[2] However, more advanced stealth ships were developed, such as an Unnamed Stealth Spacecraft using a form of cloak "bubble." This technology hasn't yet been observed in widespread use.[7]

Another form of Active Camouflage is Carbon Nanontube Cloaking used on specialized Pelicans like the Tart-cart. It is used to fool the eye at a distance. It was considered obsolete by 2553 but was still being used.

If the Active Camo is active during Campaign, you are completely invisible to the AI enemies unless you fire your weapon. Active camouflage is only usable in Campaign when you are playing as the Arbiter in Halo 2, or you obtain the Envy Skull and restart Campaign(Active Camo replaces Master Chief's flashlight). In Halo 3, rather than Active Camouflage, the slightly different Cloaking is available. It is also available as a powerup in five levels during Halo: Combat Evolved: Truth and Reconciliation, Silent Cartographer, 343 Guilty Spark, Keyes, and Assault on the Control Room.

When used in association with an Overshield, the Active Camo becomes completely useless due to the charges of the overshield washing over the player's body (except in Halo: Combat Evolved). In Halo 3, the same effect occurs when Active Camouflage and Overshields are both working.

In Halo 2, it is noted that the Arbiter's armor, while possessing a built-in active camouflage generator, is not permanent, unlike the more modern generators used by Special Operations Sangheili. There is a circle on the player's HUD that shows the amount of time left for both the usage of the active camouflage and the recharging sequence. John-117 can gain this ability with the Envy Skull on Legendary only; however, his screen will lack the meter, forcing you to remember the time allowed for use.

When playing as the Arbiter, using any attack will cause the active camouflage to deactivate, and the player must wait for it to recharge before using it again.[8]

In Halo 3, the Active Camo is no longer contained inside a pyramid construct. Instead it appears as a large, glowing sphere with what appears to be containment devices around it, enclosing the powerup in Halo 3 multiplayer; but unlike past Halo games, active camo is not found in campaign. In campaign, Active Camouflage is replaced by the Cloaking equipment, which functions in the same way as active camouflage once did. Melee attacks, shooting, throwing grenades and using equipment will negate the effect of the power-up. Also, wearing the Flaming Helmet is an obvious give-away to the opponent because the fire is still visible.

The quality of camouflage in custom games may be set to two different settings:[9]

Active Camo is an upgrade for the Arbiter. It allows the arbiter to turn invisible but his energy swords are highly visible. However, AI opponents cannot see him until he attacks, most likely meaning that the visibility of the swords is for players to easily command him. Active Camo is also an upgrade for Sangheili Honour Guards. The Honour Guard's active camo is their special ability, meaning it can only be activated for a short time, and must recharge before being used again.

The Active Camo in Halo: Reach has undergone many major changes. It is now available as an Armor Ability to both Spartan and Sangheili players. As a side-effect when used, it jams the radar of the player and all other enemy players within 25 meters, disorienting them, but also informing them of the player's nearby presence. It does not affect the radar of allies. The Active Camo also greatly reduces the volume of all sounds for its user, making it difficult to notice a grenade being thrown or a nearby enemy firing a weapon. When moving faster than crouch-walking speed, the Active Camo cloaks the user only partially and drains the amount of Active Camo faster.

The freedom for the player to control when they activate their camouflage makes it much more effective, as it allows for use in the most opportune situations, instead of restricting the player to activate it on pickup. However, the reduced hearing and radar jamming effects require the player to be aware of his/her surroundings at all times.

Unlike previous games, if you are wielding an Energy Sword and use the Active Camouflage armor ability your sword will not show. This allows you to get closer to the enemy without them suspecting danger, maybe even getting them to charge.[10] If a Spartan or Sangheili is to have their shields damaged in any way, their shields will flare when the damage is dealt and when the shield starts to recharge, outlining the unfortunate being in a yellow (UNSC) or blue (Covenant) electrical outline for about a second. This is usually not a problem, but can lead to death if an enemy happens to get a lucky grenade toss or spot the injured being while their shields recharge.

Active Camo in Halo 4 is similar to its counterpart in Halo: Reach, with some exceptions: the motion tracker jamming effect has been decreased, showing light blue indicators rather than red jamming blips. The ability still works only when moving slowly and not while firing a weapon.

Active Camo can be complimented with several armor modifications: Stealth and AA efficiency are notable, and have obvious advantages. Sensor can allow a sniper to deactivate their camo before a nearby enemy Spartan sees the radar blips. 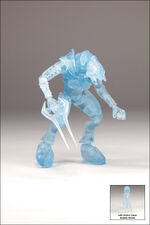 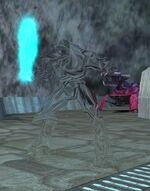 The Active Camouflage in Halo 2.

The Active Camouflage in Halo 3.

The Cloaking equipment, the replacement for active camo in the Halo 3 campaign.

The Active Camouflage power up in Halo 2: Anniversary multiplayer.