Adrift, originally named Warhouse, also known as the War Games Map_Set/: 726-6,[3] is a multiplayer map for Halo 4. It is symmetrical and set in a civilian gas-mining plant that is traveling in a near-space orbit above a gas giant, with a HRUNTING Mark II [D] Exoskeleton being constructed in the middle of it.[4][5]

This map focuses on close quarters combat and has many corridors and passageways, which can be used to surprise the enemy.[6]

Adrift is an inversely symmetrical map which has distinct bases for both teams. There are man cannon platforms that will take the player to either base depending on which man cannon they choose.

Each base has three hallways connecting to it. The bottom hallway connecting to the base will lead to a man cannon platform. The bottom hallway also has a stairway halfway through that will take the player to the bottom of the map. The bottom of the map has two gravity lifts, four stairways, and multiple boxes which can be used to jump out. The gravity lifts lead to the "lift hallway" of either base, depending on the lift taken. The lift hallway connects a man cannon platform to the base. The third hallway leading out the base is the "attic," which is on the second level of the base and leads to the Overshield's spawn. 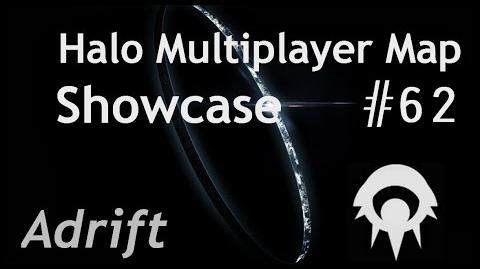 Concept art of the mining ship.

Concept art of a Pelican dropship arriving at the ship.

Concept art of a lone soldier at an Loading Bay, 04-A7.

Concept art of the ship's industrial lattices.
Add a photo to this gallery

A pre-released version of Adrift, note the brighter lighting.

The first appearance of Adrift in its working title called, "Warhouse."

The pre-released HRUNTING Mark II [D] Exoskeleton in the center of the map.

Another pre-released view of the map.

Another pre-released view of the HRUNTING Mark II [D] Exoskeleton.

An pre-released view of three Spartan-IVs advancing along a corridor on Adrift.

Another pre-released view of Adrift.

A pre-released view of the corridor on Adrift.
Add a photo to this gallery

A pre-release exterior view of the facility, note the FFG classification.

A Spartan-IV using a jet pack on Adrift.

Two Spartans fighting in the hallways of Adrift.

Spartans engaging each other in the red hallway of Adrift.

External rear view of the mining ship.
Add a photo to this gallery

An Overhead view of the map.

A heatmap of Adrift.
Add a photo to this gallery

Retrieved from "https://halo.fandom.com/wiki/Adrift?oldid=1788953"
Community content is available under CC-BY-SA unless otherwise noted.