Alpha Site is a map for the Firefight game type in Halo 3: ODST. It is unlocked by completing the ONI Alpha Site level in campaign.

Alpha Site's general layout is a baseball-diamond shaped battle area, with players spawning on one side (the inner complex) and enemies dropping from Phantoms on the other (outer complex). There is a sniper rifle that spawns on this level, as well as a shotgun.

The map was revealed first in the 7/31/09 Bungie Weekly Update.[1] It takes place in the interior of the ONI Alpha Site. 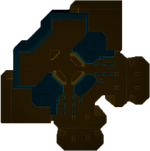