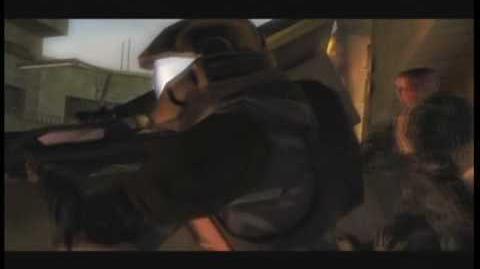 Another Day at the Beach is a bonus video on the Halo 2 Multiplayer Map Pack. It details what happens to the second Pelican after being shot down by the Scarab in the cinematic before the level Outskirts.

The second Pelican, which is shot down in the first cutscene of Outskirts, flies over Hotel Zanzibar and is spotted by a Minor Elite. Private O'Brien and the Pelican's pilots are killed in the crash, and Sergeant Stacker tells the 3 remaining ODSTs (Butkus, Jones, and Walpole) to grab their tags and ammo.

The Elite sends in two Minor Grunts and a Jackal Sniper to engage them, and the sniper nearly hits Butkus. Jones, the squad's sharpshooter, easily takes him out. The Jackal's body falls from the ledge and lands next to the Grunts, scaring them back to their previous location. However, the first Grunt gets by the Elite, manages to grab the second one by the neck, and throws him aside. He then activates his active camouflage and leaps down towards the ODSTs.

The Elite takes out his Energy Sword and slashes at Butkus, connecting with the ODST's Battle Rifle and cleanly severing it. Butkus falls and grabs a Plasma Pistol, originally in the possession of the Grunt. The Elite then throws a Plasma Grenade at Walpole's helmet. Walpole yelps in surprise, takes the helmet off and throws it, and the helmet explodes next to the Elite, draining its shields and deactivating his Active camouflage. The Elite grabs Jones and uses him as a hostage, with the Energy Sword at his throat. Jones tells the ODSTs to take him out, Butkus fires an overcharged Plasma Pistol at Stacker's command and takes out his partially regenerated shields, and Stacker finishes him off with his Battle Rifle. The Elite falls and drops his Energy Sword. Slowly, his hand unclenches, deactivating the Energy Sword.

Cortana contacts Stacker and tells him to find a safe spot and that they'll come to him, whilst the ODSTs congregate around the dead Elite, with Walpole delivering a swift kick to the corpse.[1]

(Five ODST's inside the troop bay. Stacker is sitting between the troop bay and the cockpit. O'Brien and Walpole to the left, Jones and Butkus to the right.)

Stacker: You heard the man, boys. It's time for some hazard pay!

(The ODSTs enthusiastically prepare for combat. Butkus cocks his Battle Rifle. While O'Brien hits Walpole's arm. Jones is sitting in the corner with his Sniper Rifle.)

The pilot goes silent as a huge Scarab comes into view. Its leg spears a truck which explodes, then its main gun focuses and fires, destroying the lead Pelican. The two other Pelicans veer off, as Plasma Turrets on the Scarab's back turrets track them. The rightward dropship containing GSGT Marcus Stacker and a fireteam of ODSTs catches a burst of plasma on its left engine...

(Cuts to outside of the Hotel Zanzibar)

(The Helljumpers' Pelican, with its engines screaming and burning, flies fast over the Hotel Zanzibar)

(A group of Covenant stand on the third floor)

(The Pelican swerves towards the ground. Its starboard engine explodes and begins to flame, and the dropship crash lands behind Hotel Zanzibar. Butkus stands up from being moved from the right to the left side of the Pelican. Walpole is sitting in the same place checking on O'Brien to his right. Jones is on the left side on the ground crawling to the cockpit. Stacker, bleeding at the temple, is using the Pelican's wall for support.)

(Walpole looks up from O'Brien's body)

(Jones looks towards Stacker after peering inside the cockpit)

Jones: We lost our pilots, too.

Stacker: Grab their tags and ammo.

Butkus: (looks out of the Pelican): Sarge, we better get moving.

(The Elite stands on the building and looks at the crashed Pelican, commands the Grunts to move to the second floor and the Jackal to stay back and snipe.)

(Cut to the ODSTs. They find cover behind a wall. Butkus looks out and almost gets hit by the sniper Jackal.)

Butkus: Hello! (turns back to Jones) Sniper...3rd floor to the left.

Jones: Here, let me give him my "Welcome to Earth" gift basket.

(The Jackal's body falls from the ledge and lands next to the Grunts, scaring them back to their previous location. Frag Grenade explodes nearby.)

(The first Grunt runs by the Elite, however, he manages to grab the second one by the neck, growls loudly at him while the Grunt drops his pistol and becomes even more panicked. The Elite then throws him aside. He then activates his Active camouflage and jumps down towards the ODSTs.)

(Cut to ODSTs. They walk toward the ground floor of the hotel. Suddenly, the Elite activates its Energy Sword and slices at Butkus, cutting his Battle Rifle in half.)

(Butkus falls down. He stands up wielding the Grunt's Plasma Pistol. He waves it around, scanning for the Elite.)

Stacker: Damn, where is he? Anybody see him?

(The ODSTs sweep the area in a defense position.)

(A Plasma Grenade is seen flying through the air and sticks to Walpole's helmet. He grunts in surprise and throws the helmet away. It explodes near the Elite, deactivating its shields partially and its Active camouflage.)

(The Elite grabs Jones by the neck and uses him as a hostage, with the Energy Sword at the ready. Butkus charges his Plasma Pistol, while Stacker and Walpole aim their Battle Rifles at the alien.)

(Elite starts to say something, most likely threats. It roars at them.)

(Butkus discharges the Plasma Pistol, taking down its shields. Stacker fires a Battle Rifle burst at the Elite, and it dies, its hand slowly unclenching the Energy Sword, deactivating it, while Jones rubs his neck gasping.)

Cortana (Radio): Second squad, this is Cortana. What is your status, over?

(Walpole kicks the Elite's body over and stares at it.)

Retrieved from "https://halo.fandom.com/wiki/Another_Day_at_the_Beach?oldid=1789056"
Community content is available under CC-BY-SA unless otherwise noted.