“Hey Thorne, you hear that? Everything's going to be fine! Spartans are inbound!”
— Madsen[1]

Despite the length of his service in the Marine Corps, Madsen's wartime career was rather undistinguished. Many members of his family were members of the Corps, including his father and grandfather, both of whom were generals. This led to several acts of nepotism, and after the war, ultimately earned Madsen a place in the SPARTAN-IV program, despite a lack of notable actions.[2]

At some point before 2558 Madsen and the majority of Majestic were stationed in Rio de Janeiro on Earth. They were then transferred to the UNSC Infinity for deployment to the recently discovered Shield World Requiem. On February 7, 2558, Madsen was with Majestic and a contingent of Marines during OPERATION: LAND GRAB.[4]

In the days that followed, Madsen and the rest of Majestic were deployed once again to Requiem alongside Fireteam Crimson to clear a Forerunner facility of Promethean forces. Commander Palmer challenged the two fireteams to see who could complete their objective first, a challenge which Majestic swiftly accepted and promptly lost.[5]

After the disappearance of Dr. Glassman, DeMarco, Madsen and Palmer escorted Dr. Halsey aboard the UNSC Infinity so that she could examine a captured piece of Forerunner technology.[6] After that, Majestic was once again deployed to Requiem alongside Crimson, this time in search of Jul 'Mdama. Although Majestic didn't find him, they were called to Galileo's lab to assist Crimson in the defense of the lab against a Covenant assault.[7]

After Thorne's disappearance, he returned to Requiem with the rest of Majestic to search for him. They found him and the missing Dr. Glassman with the former engaged in mortal combat with Jul 'Mdama's lieutenant, Gek 'Lhar. Just as Gek was about to execute Thorne, DeMarco shot him in the head. The Spartans looted the body, DeMarco taking the UNSC tags and Energy Sword, Thorne taking the active camouflage unit, and Madsen taking a holographic map.[8]

As Majestic was about to board a Pelican bound for Infinity, Lasky contacted them, asking them "a personal favor." The Spartans then returned to the Covenant base and engaged the Sangheili outside, while Thorne used Gek's active camouflage to sneak in undetected.[9]

Madsen tends to have a comical attitude, this can be seen when he speaks to Hoya on board the Pelican heading toward the UNSC Infinity about his time with DeMarco in Rio de Janeiro. He is a ladies' man and proves it again, when he speaks to Gabriel Thorne.[3] Madsen has a surprising amount of knowledge regarding Dr. Halsey and the SPARTAN-II Program.

Madsen wears primary blue and secondary cobalt Recon armor with a gold visor. His primary weapon of choice appears to be the Sniper Rifle, although he has also been seen using the Assault Rifle while on the UNSC Infinity. 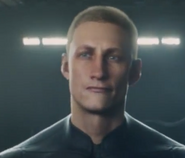 Madsen on the way to the Infinity.

Madsen sniping on Requiem.
Add a photo to this gallery

Retrieved from "https://halo.fandom.com/wiki/Anthony_Madsen?oldid=1789058"
Community content is available under CC-BY-SA unless otherwise noted.