Looking for the Halo 2 level The Arbiter, former Arbiter Ripa 'Moramee, current Arbiter Thel 'Vadam, or the The Arbiter (Achievement)?

Missions of suicidal danger and grave religious or political importance

"The Blade, the 'Will of High Prophets'"

“The Taming of the Hunters, the Grunt Rebellion. Were it not for the Arbiters, the Covenant would have broken long ago.”
— Prophet of Mercy.

The title of Arbiter was meant for the pinnacle of the Sangheili, a master of the battle-field, who would lead all the clans. It became the highest possible honor bestowed upon a Covenant Sangheili by the Hierarchs during a time of great need. It was the greatest religious rank of the Sangheili, although the Sangheili High Councilor is considered to have superior political and military status. That was, until one Arbiter challenged the words of the Prophets and lost, which caused the title to be a badge of shame. But the rank was returned to its full glory shortly before the Great Schism.

The Arbiter acted as a sort of field marshal, going on missions for the Prophets and during incidents such as the Taming of the Lekgolo, the Unggoy Rebellion, the Human-Covenant war, and most recently, the threat of the Heretics. Until the Arbiter Thel 'Vadam incited a brigade against the Covenant Empire, where the Arbiter once more lead all of Sangheili toward victory.

Arbiters were sent on the most perilous and daunting missions in desperate times for the Covenant Empire, and in those times the missions are often tantamount to suicide. On those missions, the Arbiter is expected to die and be revered thereafter as another great martyr of the Covenant on their path to the Great Journey.

Evaluating the rank of Arbiter

The definition for the word Arbiter is "one who judges," which fits the religious significance of the rank in the time of the Covenant. It was not solely a construct of the Hierarchs, however, as the title of Arbiter was reserved for the greatest warrior-rulers of the Sangheili species.

In effect, the ancient Arbiters were practically autocrats, who wielded untold authority and influence due to their superior combat capabilities. It was, in fact, an Arbiter (though unnamed) who sparked the Sangheili-San'Shyuum War, due to the Sangheili's objection to the San'Shyuum's desire to incorporate Forerunner technology into their own civilization. Although the war eventually ended with a ceasefire and the founding of the Covenant, the San'Shyuum would not ignore the mantle of the Arbiter, who would then become their most prominent and dangerous enforcer.

Fal 'Chavamee was once such an enforcer. However, he believed that his people discarded their adherence to honor in exchange for power, and firmly believed that the Great Journey was a lie propagated by the manipulative San'Shyuum. For this act of heresy, the Prophets ordered his execution via duel. To forever tar Chavamee's legacy, the Prophets gave the title of Arbiter to disgraced Sangheili as a means of regaining their family honor by performing suicidal missions. Thus, each subsequent Arbiter after Fal 'Chavamee has been "created and consumed in times of extraordinary crisis" in the words of the Prophet of Truth; it is not for nothing that the current Arbiter once considered the role as penance for failures.

As a result, an Arbiter is condemned to a life of suicidal missions to regain his honor. This includes Thel 'Vadam, who failed to protect Installation 04 from the Demon. The Arbiter is considered an equal to a Spartan-II, as both are highly skilled in combat and vehicular activities, and have the ability to instill morale even in the strongest or weakest of troops.

Nevertheless, the rank of Arbiter is held in high esteem and possesses some degree of military command, due to their skill often being used to keep the Covenant from fracturing. Even one such a figure as the Prophet of Mercy felt that "were it not for the Arbiters, the Covenant would have broken long ago." Many members of the Covenant, especially Unggoy, see an Arbiter as their "Savior," and their peers consider him as the "Will of the Prophets" or, in his military role, the "Blade of the Prophets," so the rank is still held in a relatively high esteem despite the rank being reserved to the disgraced.

The corpses, or perhaps only memorials in some cases,[1] are housed in identical caskets in the great Mausoleum of the Arbiter. In the center of the Mausoleum is a floating pod that contains the sacred armor of the holy Arbiter, highly decorative and fully functional despite its apparent age. The Mausoleum houses a very large number of caskets that reach high into the air amidst references of the triumphs of past Arbiters, including the settling of the "Unggoy Rebellion," and "Taming of the Mgalekgolo."

As 343 Guilty Spark noted to Sesa 'Refumee, the Prophets always consigned the position of Arbiter to certain Sangheili who had "significant political influence" among the Covenant. Oftentimes, those same warriors would question, even challenge the decisions of the Prophets, and that skepticism often gave rise to the charges of heresy, which would remove opponents to the Prophets. Once they were branded Arbiter, the warriors would run to their deaths and maintain the power structure of the Covenant.

Upon the Changing of the Guard and the Great Schism, the Sangheili fully broke from the Covenant after learning the truth of the Halo Rings and the Great Journey, with Thel 'Vadam retaining his armor and rank of Arbiter as he led his fellow warriors against the Jiralhanae and the San'Shyuum. Vadam would join with the Master Chief in finishing the war with the Prophets, leading to the Arbiter finally reclaiming his honor by assassinating the prophet who disgraced him - the Prophet of Truth. In the present day, with the Covenant reduced to various cadres, the rank of Arbiter is no longer a badge of shame, and has returned to its position of privilege as it was in ancient times.

The armor an Arbiter wears is kept in the Mausoleum of the Arbiter until it is bestowed upon a new holder of that title. It is composed of a bronze/silvery metal, with ornate engravings and metal work, indicating the Arbiters ceremonial nature. However, it is fully functional as a combat suit, incorporating a heads-up display, energy shield system, and active camouflage.

The technology used is all common to the standard Sangheili Combat Harness, though of an older design. While modern Covenant active camouflage has a virtually unlimited duration, the Arbiter's camouflage lasts only for a few seconds, though still enough to give him a tactical advantage.[2] Each Arbiter receives a different set of armor, though all of them have the same design. The very nature of the Arbiter means that they are sent on dangerous, often suicidal missions, where recovery of the corpse and the armor it wears may be impossible.[3] This would make it appear as though each Arbiter receives a new set of armor. However, the technology used in the suit is usually the same, with no improvements in the design to improve its capabilities. It may be that this is intentional, in order to test the Arbiter's skills, or due to the tradition.

The armor may be subject to some small amount of customization. Ripa 'Moramee was taller than the average Sangheili, at over 8'7, while Thel 'Vadam stood at 7'10''. Further, when first donning the armor, Thel lacked mandible guards or a shoulder-mounted light that he possessed after the Great Schism, where his Active camouflage was also significantly upgraded. Ripa's armor seemed to be bulletproof but possessed no shields. Ripa's armor also had far more advanced active camouflage as he was able to sneak up on Sgt. Forge on two separate occasions while fully cloaked. His unit in the game is also able to obtain a permanent cloak, however this may be just for game play purposes.[4]

Another theory about different armor sizes and apparent customization is that the armor was not ancient as it was made out to be. It may, in fact, be made new if the old armor is lost or if the current armor doesn't fit the new Arbiter. A prime example of this is in Halo Wars, when the crew of UNSC Spirit of Fire rolls his body into the mist below The Apex.

This is a list of all known Arbiters in chronological order. 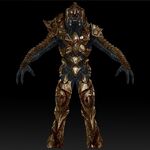 Concept for an ancient Sangheili combat harness worn by one of the Arbiters, for Halo 2: Anniversary's Terminal. 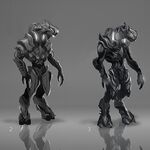 Concepts for an ancient Ranger combat harness worn by the Arbiter responsible for finally subjugating the Mgalekgolo, for Halo 2: Anniversary's Terminal.

Poster picture for the Ripa 'Moramee. 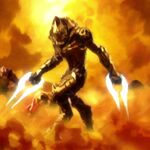 Multiple Arbiters glitch on the Halo 3 campaign level, The Covenant.

Thel with an Energy Sword.