Arcadia City is the fourth campaign mission for Halo Wars. It takes place on Pirth City, on the planet Arcadia.

Although this level doesn't give the player control over Spartan-IIs, they will be assisted by AI-controlled Spartans. In this mission, the objective is to protect civilians as they run toward three evacuation ships.

{All It Did Was Point}

View of the outside of the UNSC Spirit of Fire. Cut to the Observation Deck.

Scene fades to Spirit of Fire approaching a planet.

Captain Cutter comes on to the Spirit's bridge.

Serina brings up a hologram of Arcadia and a few ship markers.

Captain Cutter walks over to a monitor to see, amongst various images of the battle, a group of Spartan-IIs engaging enemies off screen.

Scene cuts to Arcadia surface, Covenant forces are engaging civilians and transports, with three Spartans trying to fight off the enemy forces.

A Pelican drops Forge's Warthog off with several Hornets to assist.

Forge and the Hornets clear the area.

Forge and the others make their way to the base location engaging various Covenant forces along the way, base is soon constructed.

These next few lines are when the transports and civilians come under attack.

If Cargo One is lost:

Captain Cutter: "The transports are away, Sergeant Forge pull back and re-group, new orders are incoming."

Forge: "Roger that, Captain. Most of us are heading out of the city through the traffic tunnels." 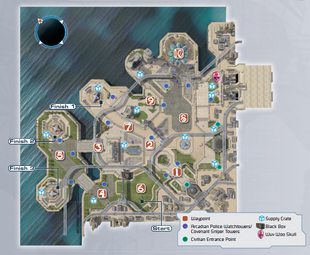 A map of the level.