An Armor Ability is a customized attachment developed by the UNSC, the Covenant Empire, and the Ecumene to enhance the performance of armor worn by Spartans, Sangheili, Jiralhanae, Skirmishers and Forerunners. These armor modules can upgrade a specific function of the armor, synchronize with separate hardware to create new functionality, or add entirely new functionality by themselves.[1] Armor Abilities are different from Halo 3's equipment in that they can be used an infinite number of times and have a cooldown time between uses.

In multiplayer, Armor Ability use is disabled while performing objective-related tasks. If player attempts to use an Armor Ability while holding an Oddball or Flag, the object drops out of their hands.

Active Camouflage also serves as a Radar Jammer. While active, Active Camouflage displays many moving red dots within 25 meters of the player on the user's and enemies' motion trackers. Allies are not affected.

Its pickup color is cyan.

Armor Lock locks the user in place and makes the user invincible for the time it is active. When deactivated, it sends out an EMP blast to nearby enemies and pushes them away. The longer the ability is active, the larger the final blast radius will be. Armor Lock can repel incoming Rockets and, if activated while on top of a Falcon, can push the Falcon out of the sky.

In a Title Update, Armor Lock was updated so that taking damage causes the Armor Lock's energy to be consumed more quickly.

Its pickup color is orange.

The Drop Shield is a spherical energy shield that protects the player from projectiles but still allows characters through, similar to the Bubble Shield from Halo 3.[5] While inside, a player's health (not shields) will regenerate. The strength of the shield is approximately three times that of a Spartan's energy shielding. As it takes damage, it will change color and eventually deactivate if enough damage is taken.

Its pickup color is light blue.

Evade allows the player to roll quickly in any direction, breaking enemy lock-ons and tracking in the process. It is the only ability not available in Campaign.[6]

Its pickup color is purple.

Hologram produces an identical holographic copy of the user that heads to a location designated by the player and stops if it reaches it. The hologram will flicker away after 10 seconds or if it is damaged.[7]

Its pickup color is yellow.

Its pickup color is white.

Sprint allows the user to move at an increased speed at the cost of the ability to fire. Sprinting causes the user to pant heavily, which can be heard by nearby players.

Its pickup color is green.

Like in Halo: Reach, Armor Abilities in multiplayer and Spartan Ops are chosen as a part of a player's loadout.

Promethean Vision allows the user to see through walls. Other players are alerted to its use by a noise it emits, a red light on the user's helmet, and a red wave originating from the user produced on the motion tracker.

The Autosentry is an automated turret that fires slow-moving projectiles at nearby opponents. It is similar to the auto-turret from Halo 3. This ability is also used by Promethean Knights.

The Regeneration Field creates a large green bubble that recharges the shields of players who are inside of it. If a player takes damage while inside of the field, their shield regeneration will be stopped for a moment. It is almost identical in function to the Regenerator equipment piece from Halo 3. This is the only armor ability not available in the campaign of Halo 4.

The Hardlight Shield is a shield that appears in front of the player and absorbs incoming damage. While activated, the user's movement and turning speed will be slowed, the user's shields will not recharge, and no weapons can be used. The Hardlight Shield cannot be destroyed and will remain active until its energy is depleted or the player deactivates it. This ability is also used by Promethean Watchers.

The Thruster Pack provides the user with a quick burst of speed in one direction. It is similar to the Evade Armor Ability from Halo: Reach except that it launches the player a noticeably shorter distance.

The Jet Pack functions identically to the Jet Pack in Halo: Reach, propelling the user upwards and allowing them to maneuver in mid-air.

The Hologram functions almost identically to the Hologram in Halo: Reach. If shot, it flickers for an instant and then goes back to being solid instead of continuing to flicker. The Hologram will also teabag dead bodies if commanded to stand over one.

In Halo: Spartan Assault, Armor Abilities cannot be deactivated by the player. They remain active until all of their energy is consumed.

Sprint allows the user to move faster while still retaining the ability to fire, similar to the Speed Boost powerup in Halo 4.

Overshield makes the user invincible for the time it is active. When it deactivates, the user's shields will be full.

The Autosentry functions identically to the Autosentry armor ability in Halo 4, firing projectiles at nearby opponents.

The Stun Blast stuns hostile infantry within a radius of the user. While stunned, enemies cannot move or shoot.

The Seeker Drone homes into the nearest enemy infantry or vehicle and then explodes, causing damage.

The Active Camouflage functions similar to the Active Camo in Halo: Reach and Halo 4 except that the user is fully camouflaged regardless of movement.

Repel creates a temporary ring of gas around the player that prevents Flood from crossing.

Teleport teleports the user directly to their Spartan teammate.

A SPARTAN taking flight with the Jetpack.

A first-person view of a SPARTAN-III using the Sprint Armor Ability in the Halo: Reach Multiplayer Beta. The Sprint icon can be seen above the motion sensor to the left.

A first-person view of the Active Camo Armor Ability being used in the Halo: Reach Multiplayer Beta.

The Armor Lock Armor Ability being used in the Halo: Reach Beta.

An Elite using the Evade Armor Ability, which can launch a player in the air if performed up an incline.

Three SPARTAN-IlIs in a Drop Shield. 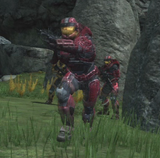 The Hologram Armor Ability being used in a Red vs. Blue PSA showing Blood Gulch and Equipment.

The stages of the Hologram Armor Ability.

A player about to swap Sprint for the Hologram armor ability in the campaign mission Nightfall.

The Drop Shield in use.

A glitch with the Hologram Armor Ability that caused the Elite's hologram to have no armor.

A step-by-step study of the Evade Armor Ability.

A Spartan taking cover in a Drop Shield, after being impaled by Needler rounds.

The outline from an invisible Elite carrying a Data Pad, found on legendary in Halo Reach's campaign.

A Spartan III going into Armor Lock to defend against a Banshee.

A Spartan III using the hologram in Halo: Reach.

Concept art of the armor ability device in Halo: Reach.

Concept art of the armor ability device in Halo 4.

The Hard Light shield in use.

A Spartan IV using the Hologram in Halo 4.

A Spartan IV using his Thruster Pack.
Add a photo to this gallery

Retrieved from "https://halo.fandom.com/wiki/Armor_Ability?oldid=1797948"
Community content is available under CC-BY-SA unless otherwise noted.