Were you looking for the Halo 2 level, The Armory, the Field Armory or the The Armory in Halo: Reach?

An Armory is a military depot used for the storage of weapons and ammunition and are quite common on UNSC ships and bases.

Among the weapons that were noticeably absent from the Autumn's armory were Sniper Rifles and Pistols. Another kind of weapon that didn't appear there at all were Frag Grenades. However, many Shotguns, Assault rifles, Rocket Launchers, and ammunition for these weapons were still in their racks, though some weapons were scattered everywhere with no ammunition in them at all.

Large orbital space station like these are fitted as well with at least one armory, in case of enemy boarding actions. Only one is seen onboard Cairo Station in the level with the same name. It contained a large number of weapons, including Shotguns, Battle Rifles, SMGs, and ammo. It also housed the Shield tester used to bring John's armor shields back online.[2]

A 20th-century base refitted for UNSC usage against Covenant invaders near Voi, Kenya. No official armory is seen inside this base, however lots of weapons are found scattered throughout the level, mainly held in racks.

In addition to these racks, there is an easter egg where a Marine is attempting to get ammunition from another Marine behind a locked door. The first Marine cannot get in because they require a password.

Being a city and not a military base, there is no official armory. But there are multiple Superintendent supply caches throughout the New Mombasa streets, unlocked by finding Audio logs.

Sword Base was an Office of Naval Intelligence military/research installation on Reach, later destroyed by the Covenant. No official armory is seen within the base during the level but there several cases of weapons on the walls, but at the gate of Sword Base there are weapon cases on the floor were the Target Locator is found. But it's more likely this is a garage because it fits at least three Warthogs. 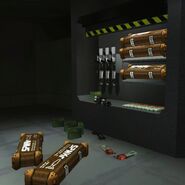 The armory of UNSC Pillar of Autumn on the level, The Maw.

UNSC Armory Floor Sign.
Add a photo to this gallery

Retrieved from "https://halo.fandom.com/wiki/Armory?oldid=1815755"
Community content is available under CC-BY-SA unless otherwise noted.