Arrival is the first campaign level of Halo 3. It does not contain actual gameplay, consisting instead of a look inversion test on lower difficulties, and the game's opening cutscenes.

John-117 crashes in an African jungle near Mount Kilimanjaro and is eventually recovered by Thel 'Vadam (the Arbiter), Sergeant Major Avery Johnson, and several Marines.

You can not get the Campaign Complete achievements for Heroic and Legendary without completing this level.

It is a night sky: several bright pinpoints of white light, stars, hang in the center. It's a tranquil forest, with lush forestry and a winding river. Then, Cortana's voice begins whispering in voice-overs.

As the camera pans down, something comes into view entering the atmosphere, trailing flames splitting the night sky. Although it is not recognizable at this time, it is the Prophet of Truth's Dreadnought.

The fireball comes nearer, at an oblique angle to the camera.

A second, lesser fireball breaks off from the main one. It moves at an oblique angle to the first, which is to say, towards the camera. It moves closer while the first vanishes behind a spray of trees.

The object moves even nearer, and its trajectory begins to curve until it is heading directly for the camera.

The fireball roars past the camera and smashes into the ground with an earth-shattering impact. For a moment, we can see that the area is a jungle, quiet and peaceful, and now, full of light and sound. Cortana's last words are tinged with humor.

Pan down on the same forest, but now it's early morning, with the sun streaming through the trees onto the smoking ruin where the object hit ground. In the foreground, an armored gauntlet is visible. In the background, several Marines move around; 1st Squad. The one in the back wears a Sergeant's cap. The Marines of 1st Squad anxiously observe an object just below the camera position. A dread silence permeates the jungle.

The Sergeant in the hat turns around and takes a long drag on his cigar.

The Sergeant blows out smoke. It is none other than Sergeant Major Avery J. Johnson.

The Marines move closer to the object while one aims his gun to the left then the right of the camera looking for any sign of the enemy. For the first time, we can see that the object is John-117. He lies at one end of his own personal crater, the result of falling about two kilometers. Despite the motionlessness of the man inside, the armor is neither scratched nor singed, apart from a large scrape across the upper right of the chestplate. John lies in an odd position, like a dropped statue; the figure is still; hands raised awkwardly. The Spartan is still and silent. The Marines move closer to John, taking up combat positions. One sits down beside him and takes out a small computer.

He taps something in on the computer. With a hiss, John's outstretched arms collapse onto his chest. The Marine checks for vital signs. No readings.

Johnson kneels by the side of his fallen friend and places a hand on his chest, feeling for breath, or any sign that the man is alive. He inadvertently breathes smoke into John's face. After a few seconds, he sighs sadly, reaches behind John's head and pulls Cortana's empty chip out of his helmet.

An armored hand reaches up and grabs his wrist. It is John-117's.

He pushes himself slowly to his feet.

John says nothing. Instead, he reaches down and takes Cortana's chip from the Sergeant's hand and lets go of his arm.

John stares at the data crystal, and for a second, Cortana's face flashes across the screen, along with an echo from the previous game.

Johnson gives him a confused look.

John inserts the chip into the port at the back of his helmet.

{Gameplay} (Note: This sequence only appears if playing on Single Player and on Normal or Easy.)

The Corporal gives him a screen with a red light.

It goes green when John-117 looks at it.

If the calibration doesn't work:

John looks around, taking in his surroundings. Somewhere near him is a familiar sight... the heat-wave effect of a Covenant Active camouflage. Johnson gives it a nod. An Elite decloaks, revealing itself to be the Arbiter, Thel 'Vadam. John-117 moves with fluid grace, brushing aside Johnson and another Marine next to 'Vadam, drawing Johnson's pistol from its holster.

'Vadam glares at John-117, showing no sign of discomfort or making any move to point the gun away from himself. John hesitates to lower his gun.

The Spartan slowly lowers his gun. 'Vadam clacks his mandibles together: a shrug.

Thel Vadam makes to move past John-117, but the Spartan pushes him back, and 'Vadam turns and walks away.

He grabs an Assault Rifle from a nearby Marine and holds it out to John. Swiftly, the Spartan snatches it, as if annoyed by 'Vadam. 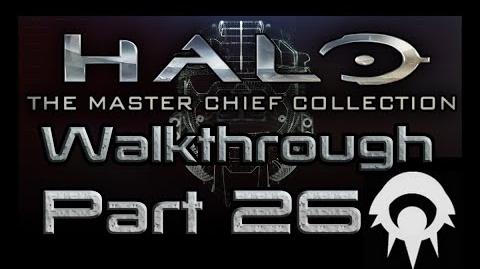 Retrieved from "https://halo.fandom.com/wiki/Arrival?oldid=1788503"
Community content is available under CC-BY-SA unless otherwise noted.