Artificial intelligence, abbreviated A.I., is an artificially created construct that exhibits intelligence similar to a sentient being. AIs were known to be used by the Forerunners, and later by humanity to a great extent. The first generation "Smart" A.I.s were developed by humanity in the mid-21st century.[1]

Most A.I. constructs give themselves a unique appearance (otherwise known as an avatar) that corresponds to their main use.

The process of creating an A.I. is different to what most people realize. Instead of simply "programming" a Smart AI, the A.I. matrix is actually created by sending electric bursts through the neural pathways of a human brain which are then replicated in a superconducting nano-assemblage in a process known as Cognitive Impression Modeling. This destroys the original brain tissue however, and so the brain being used could only be obtained after the host had died. However, in some instances, as in the case of the A.I. Cortana, the candidate brain was flash-cloned and had its memories transferred to the receptacle organs so that the host, in this case Dr. Catherine Halsey, could remain alive. However, this is extremely inefficient. In the case of Cortana, out of twenty of Dr. Halsey's cloned brains, only two of them took.

Dr. Halsey supervised the creation of the template for every third-generation "Smart" A.I. on the planet Reach. She has extensive knowledge on how A.I.s work.

Smart AIs, or A.I.s that are not confined to their one purpose, have a normal operational life span of about seven years. Because the "Smart" A.I. is subject to an established memory core which cannot be replaced, the more the A.I. collects data, the less "thinking" space it has to work with. An A.I. will literally "think" itself to death. Dumb A.I.s do not have this problem as they do not learn anything that is outside of their set limits of a dynamic memory processing matrix. They are quite useful in their particular field of expertise, but very limited. Smart A.I.s can function and learn as long as they are active.[2]

If a "smart" human A.I. exists for over seven years, it usually enters a stage of rampancy similar to the human state of insanity. The A.I. begins to think that it is superior to its human creators, and has delusions of godlike power.[3] However, the impression that Halo: The Fall of Reach and Halo: First Strike give is that the A.I. would lose all combat effectiveness by being permanently locked in a state of thought, like daydreaming - the description given is "as if a human were to think with so much of their brain that they stopped sending impulses to the heart and lungs." This is because as the data reaches a "critical mass" the neural pathways become "jammed" with so many pieces of information being queried and analysed, at expense of tasks such as piloting starships or monitoring computer networks.

It is technically unclear exactly how an A.I. works, as it is only based on the functionality of a human brain, which UNSC scientists do not fully understand. AIs do not have physical bodies, rather they are advanced software consisting of a Riemann Matrix for higher-function processing. This matrix can be downloaded into a Data Crystal Chip for mobility. In case of Rampancy, the Riemann Matrix has a fail-safe program that will destroy the A.I. Since A.I.s must be created by mapping out the connections of a human brain, it seems likely that the UNSC does not have an understanding of how to create A.I.s from scratch, and is limited to simply "copying" the intelligence of biological organisms. In the real world, this is an established possibility for creating artificial intelligence.

They can only take physical form where holographic technology is available. This requires a Holotank of some kind.

Because "Smart" A.I.s are created using either actual human brains or cloned human brains, there are residual thoughts, memories and/or feelings that remain. These residuals can be anywhere from the "feeling" of a hair brush being pulled through hair, in the case of Sif, or even have an effect on the mannerisms and characteristics that make up the personality of an A.I., in the case of Cortana and her likeness to Dr. Catherine Halsey.

Other than the two types, "Dumb" and "Smart," human A.I.s are given certain purposes. Over the course of a few hundred years, humans have developed a highly advanced understanding of this type of technology, and are capable of creating intelligent and nearly sentient "Smart" A.I.s. However, these beings are not the result of actual programming, they can only be created by "copying" a human intelligence, which is only possible by destroying the original brain. The most sophisticated of human A.I.s are sometimes considered to be comparable to known Forerunner A.I.s. Human Smart A.I.s have an "expiration" date of seven years. Once they have reached this age, they will become very susceptible to rampancy, as has been demonstrated in the Insurrectionist A.I. Juliana. This time limit can (in theory) be prevented, or at least subdued, by having the A.I. focus on one thing. In the case of Juliana, the Rubble and its inhabitants. Forerunner A.I.s are also succeptible to rampancy, but have a much longer, or possibly infinite, time limit and tend to become rampant because of outside influences. The "seven years" is also another obvious reference to Bungie's favorite number.

Humans use A.I.s, both "Smart" or "Dumb," to perform a variety of specific tasks. These include, but are not limited to, controlling planetary shipping operations, like Sif, managing agricultural operations, like Mack, or serving as a Planetary Security Intelligence, like Loki. One example of civilian use for "Dumb" A.I.s is managing an entire city's infrastructure. These constructs are known as Urban Infrastructure A.I.s. All of Earth's tether cities are managed with the help of such construct's. Urban Infrastructure A.I.s perform a wide variety of basic tasks, examples such as driving the city's garbage trucks to operating the traffic lights. They can also work in cooperation with the UNSC Marines if needed. One example of this is the Battle of Mombasa, when New Mombasa's A.I., the Superintendent, assisted the UNSC forces in the city in fighting off the Covenant.

The Cole Protocol states that capture of an A.I. by the Covenant is unacceptable. When in danger of capture, A.I.s are to be terminated and completely erased. However, the A.I. Cortana did find what seemed to be an extremely fragmented copy of a human A.I. stationed in the Covenant flagship, Ascendant Justice.

UNSC AI are more independent than humans realize.[4] AIs are also very loyal and devoted to their creators.

As exemplified by the Monitors, the Forerunners have developed a civilization with an extremely advanced knowledge of artificial intelligence technologies. Forerunner A.I.s have managed to achieve full sentience and are highly intelligent.

The manner in which Forerunner A.I.s are created is unknown, yet is probably very different from the human method of cloning the intelligence of a sentient organism. Monitors, and possibly other Forerunner A.I.s are physically represented by large, shielded and spherical metallic "robots" whom possess a single "eye," which is possibly used to perceive the monitor's physical surroundings. The most well known of Forerunner A.I.s are the protocol-obsessed Monitors, made famous by 343 Guilty Spark and his quirky (and somewhat unstable) nature.

One method the Forerunners have to create A.I. is with The Composer, which instead of just analyzing the cerebral cortex alone to create an A.I., it destroys the victims flesh, muscle tissue, vital organs, followed by the skeletal structure and reducing them to ash. This process removes the consciousness of its victims in order to implement them into Promethean Knight constructs. However, due to the lack of morality behind the Composers' very nature, The Librarian took it and hid it on Installation 03 to prevent The Didact from using it.

Promethean Crawlers, Promethean Watchers, and Sentinels are all examples of Forerunner artificial intelligence.

So far only two types of Covenant A.I.s (Security and Naval) have ever been encountered within the universe. Their knowledge in this type of technology appears to be inferior to that of the UNSC and the Forerunner, as demonstrated by the fact that their A.I.s were most likely captured UNSC A.I.s, which were altered to fit within their theocratic society.[5] This is likely because of the former ban on A.I.s. In Covenant mythology, it was an A.I. that led to the demise of the great Forerunner civilization by defecting to their enemies, the Flood. As a result, the Prophets imposed a ban on this sort of technology, a ban which has apparently been broken on more than one occasion.[6] The ban may be an explanation for their less-developed understanding of artificial intelligences. 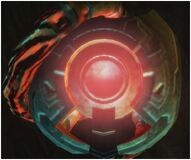 A Forerunner AI, 2401 Penitent Tangent, the Monitor of Installation 05. 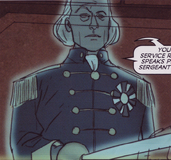 FitzGibbon, AI of the UNSC Prophecy. 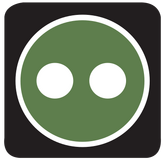 The Superintendent, Urban Infrastructure AI of the city of New Mombasa.

032 Mendicant Bias shortly before going rampant and turning over to the Flood.

Déjà
Add a photo to this gallery

Retrieved from "https://halo.fandom.com/wiki/Artificial_intelligence?oldid=1812942"
Community content is available under CC-BY-SA unless otherwise noted.