The Assassin medal is represented by a knife in front of a stylized X. After the player kills an opponent by performing an assassination on an opponent from behind, a message appears on-screen that states: "You assassinated (player's name)." In Halo: Reach, the Beat Down medal is represented by a ninja on an eight-pointed star, previously called Assassin in Halo 3. It can be acquired when Campaign Scoring is activated and also in multiplayer. There are some occurrences where direct frontal punches result in an assassination, while assassinations sometimes result in beatdowns due to the attacker meleeing to the side. 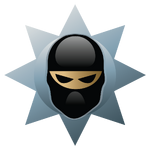 The Assassin medal in Halo 3.

The Beat Down medal in Halo: Reach.

The Assassin medal in Halo: Reach.

The Beat Down medal in Halo 4.
Add a photo to this gallery

Retrieved from "https://halo.fandom.com/wiki/Assassin_medal?oldid=1801480"
Community content is available under CC-BY-SA unless otherwise noted.