The Assault Harness is an armor set used by the Sangheili, and features a dynamic recharging energy shield. It is an armor permutation in Halo 3's multiplayer. It is one of the four permutations to be unlocked by default.

It is a reissued pre-Covenant Elite harness that features reinforced aligned composites and buttress principle protective stratum to preserve structural coherence of underlying tissue, and ultra resilient deltoid protection to aid in the concussive shock force and direct kinetic energy.

Much like the Combat Harness, it is also designed to be intimidating and damage the enemy's psyche and morale. The armor was restricted from use when the Sangheili joined the Covenant, due to its startling effectiveness, but began to once again issue the armor after seceding.[1]

Unlock: Starter.
The helmet is completely sealed unlike the Combat Harness and its main feature is a rounded plate around their forehead and head. It then features a pair of orange goggle like lenses. Both mandibles are protected by an angular guard and features a neck ring to the back with a pair of lights on each side. Unlike most other Sangheili armors, this helmet only has two mandible guards instead of four separate ones. The helmet also has metal plates along the Sangheili's neck.

Unlock: Starter.
The Shoulder Pauldron is squared off with a simple set of shapes and rectangle plate with a roughly triangular form on each side. Due to the fact that they are square and feature a "trim" (the triangular plates), they are arguably more similar to Halo 2-era Elite Shoulders than Combat models are.

Unlock: Starter.
The Thoracic Cage of the Assault Harness is nearly identical to that of the Combat Harness. The differences include a pair of clasps on each shoulder and a hexagonal piece armor set on the center of the chest.

A Sangheili in silver Assault Armor making its appearance on the outskirts of Sandtrap.

A Sangheili in the Assault Harness.

A glitched Assault and Combat helmet together found on the Halo 3 level, Floodgate.

A Sangheili with the Assault Headpiece on Valhalla 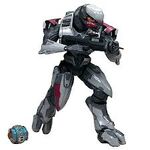 A Assault Elite figure made by McFarlane Toys.
Add a photo to this gallery

Retrieved from "https://halo.fandom.com/wiki/Assault_Harness?oldid=1789151"
Community content is available under CC-BY-SA unless otherwise noted.