For other uses of Assembly, see Assembly (disambiguation).

“The Covenant war machine continues its march to conquest; even with its head severed it is still dangerous”
— Description of Assembly in Halo 3

Assembly is a Halo 3 multiplayer map which is part of the Mythic map pack, which additionally includes Orbital, and Sandbox. It was originally planned to be in the Legendary map pack under the name Purple Reign, but was cut out due to the fear that it wouldn't be finished on time.

The overhead, legless Scarabs can be seen moving by some kind of automated gravity beam. Assembly appears to be a structural support for the gravity beam. As such, the area outside the level is immense.

The map itself is bowl shaped, sloping toward the center. This bottom floor is dotted with pillars and walls for cover. It has an outer rim with four bridges, that connect to the two-story center structure, and has small structures on the rim intended as high ground. The bases are symmetrical, but the level actually has two distinct sides, with a lift on one side and what is referred to as the "dugout" on the other, making side differentiation better. Line of sight is generally open, with mid-range combat being optimal when on the second level. However, within the center structure and around the pillars that dot the bottom level, close combat is possible.

The map is focused on competitive playing, as it is a multi-story arena-style map. It features two "somewhat enclosed" bases, with one-way mirrors on the second floor (like those in interrogation rooms), where players are able to look out, but players outside are unable to see in.[1]

Before Assembly was removed from the Legendary map pack, it was stated that one of the maps would expand upon the "Scarab-Hunter mystery." In a Bungie Weekly Update,[2] it was stated that, "One base of this open-air arena could end up getting called 'Energy side' and another call-out could end up 'Hunter side,'" so it's possible that this was the map they were referring to. The two sides are named as such as one side has tubes containing Lekgolo worms and the other contains electrical cables. The tubes presumably are fed into the Scarabs, filling the empty husks with the two.

Adding to this mystery, Luke Smith posted on a thread on the Bungie forums that "the name Assembly is extremely appropriate."[3] It would be found that this comment, came after the release of the name of the map in the Weekly Update on the same day. His comment would refer the fact that Scarabs are assembled within the facility. The Scarabs are carried along an assembly line, with the playable area of the map being one of the machines that constructs the Scarabs.

It was revealed that like the Hunters are made of many Lekgolo Worms joined together, a Scarab tank is a whole colony joined together, as had been theorized by Halo fans. This was confirmed by an article in the magazine Game Informer.[citation needed]

As is obvious from the level's name and environment, the level takes place on a facility as part of a massive Scarab production line. Above one's head is a large gravity line-type conveyor belt, which transports husks of Scarab torsos, without inner workings, legs, or armaments. The husks still appear energized.

The husks come out of a large orange hole of some kind on one end of the map, with the movement of machinery and releasing of steam. The device halts above the facility the players play upon, which has a large energy beam that leads up to a large ring around the husk. The beam then decontaminates the husk so Lekgolo worms can be inserted later on. The device gives off a large electric field and the husk shakes wildly. The husks then continue along their way in the same manner as they came into vision, exiting through a blue hole, once again with the movement of machinery and releases of steam.

The production line appears to take place in a lake of green liquid. Although this is possibly water appearing green in the poor lighting, water could be used to power the machinery, possibly with a Hydro Processing plant somewhere out of vision. It is also possible that it is a large basin of coolant (like the green liquid dripping from the large holes in the Truth and Reconciliation on Installation 04) used in the production machinery, and possibly in the Scarabs themselves (it can be seen in Halo 2 that the Scarab's main gun drips a green liquid when firing). It could also be the liquid in which Lekgolo colonies live in. The lake's purpose and composition is unknown, but one thing for certain is that it is quite deep and very large.

The station the player plays on appears to be like an island, isolated, with several devices appearing to repeat Covenant numericals. The island structure is based around a center energy beam in the middle which appears to be the main function of the island.

It is not known what the seen process or machinery does or is used for, and nothing is known about the process other than what is seen, although, the description of the Mythic map pack in the Xbox LIVE Marketplace says that the machinery in Assembly is used for decontaminating the Scarab husks.

The crest of the hidden Skull on this map appears to be what looks like that of the Lekgolo worms referring to the Scarab assembly line in the distance. 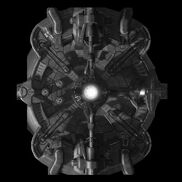 A sketch up of Assembly by Lukems.

Assembly in a full view.

Another look at the Scarab.

Lekgolo as seen on Assembly.

An outside view of Assembly.

The Mauler and Rocket Launcher make appearances in Assembly, as seen in this image.

A battle on Assembly.

Far off screenshot showing the massive size of Assembly. Assembly is in the middle of the purple circle on the lower right.

A screenshot of Assembly.

One of the two bases the red or blue team's initial spawn is. 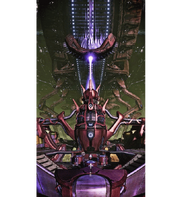 A vertical panorama of the level.
Add a photo to this gallery 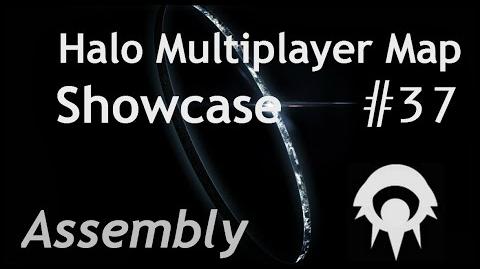