The Automated Turret, also known as the Auto-Turret, is a form of equipment similar in design to a Sentinel.

As its name implies, it acts as an automatic defense system (deployable antipersonnel turret) for the player and is featured in Halo 3. It is so far only encountered on the Halo 3 levels The Ark, The Covenant and Halo, and is not found on any multiplayer maps due to the issue of keeping the game balanced. The auto-turret is best dropped in an area where you want to defend; once deployed, it will automatically shoot at the enemy if they are within the turret's sight.

This small, robotic turret is a piece of Forerunner technology found on the Ark and Halo and resembles a stripped down Sentinel. Its mode of attack is firing a thin, blue beam at its target, similar to the beam fired by a Sentinel Major, although it is slightly stronger. This device is extremely adept at destroying Flood of all kinds, but is still highly effective at taking out other enemies. Its drawbacks are that it takes a long time to find and shoot a target, it has to wait a minute after deployment before it can attack, and it will occasionally shoot the player. It is useful to deploy when you have many hostiles in the area, providing the player with added firepower.

Its HUD symbol is a silhouette of the equipment itself, and slightly resembles the symbol for the Power Drain.

After the player has defeated 343 Guilty Spark, if the player deployed any Auto-Turrets outside the Control Room, they will turn against the player and fire at him/her. This could be due to the fact that a Forerunner construct has been destroyed, and any other Forerunner constructs in the immediate area must kill the construct's destroyer. Another theory of why they behave in that manner is because the Monitor of the Installation has been destroyed, and without any protocol to follow, they fired at anything that moved. This includes the Master Chief and the Arbiter. When they are against the player, their shots are incredibly dangerous, strong enough to kill you in one shot on Easy. On the level The Covenant, if you use an Auto-Turret during the part where you are allied with the Flood, the Auto-Turret and the Flood will try to kill each other. It is likely that the Auto-turret is encoded into the level as a 'Forerunner team member', meaning its allegiance lies with Guilty Spark. When Guilty Spark, a member of the 'Forerunner team', becomes your enemy, it follows a script to break the team allegiance between the player (the Master Chief, and on Co-op, the Arbiter). This is also why the Flood and Auto-turrets fight each other, because while the player's allegiance is aligned with the Flood, the Forerunner and Flood teams remain enemies.[1]

However, on the same level, when you get to the Separatist Phantom that arrives to pick up the Arbiter, if you destroy the Phantom (thus preventing Guilty Spark from departing) and deploy an Auto-Turret, it will fire at Guilty Spark for unknown reasons although this is probably a glitch. If you kill all of the Marines and allow the Flood to live, the Flood will attack Guilty Spark. 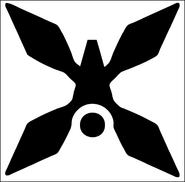 A closeup of the Auto Turret firing its beam.

An Automated Turret attacking a Grunt.
Add a photo to this gallery