“Freezing winds scour blasted terrain, and ancient battle scars are a grim reminder that this is a precious prize.”
— Bungie.net: Legendary map pack[1]

Avalanche is a large, symmetrical multiplayer map featured in Halo 3.[2] It is featured as one of the three maps in the Legendary map pack that was made available on April 15, 2008. The map is a remake of the Halo: Combat Evolved map Sidewinder, although it has an extreme amount of changes.

Avalanche is a large Forerunner power station set on the front of a huge glacial shelf on the new Installation 04. The structure pulls its power out of the densely compacted glacial ice that constantly builds up behind the station before it cascades into the ocean below it. The Man Cannons located in Avalanche are much more powerful than those located in other Halo maps, being able to launch players halfway across this huge map.

The map itself is centered around two bases at each end of a U-shaped snowy valley. One side is noticeably lighter than the other with trees and bare rocky walls, and the other is much darker with more shadows, no trees, and icy walls. To add an interesting dynamic in one-sided objective games, there's an asymmetry in ; the assaulting team has exclusive snow-camo UNSC vehicles at their disposal, while the defending team has ordinary Covenant vehicles to begin with. The map is set to prefer objective gametypes, but works well with BTB slayer and snipers as well.

New Forge objects have been created just for this map, which can dramatically alter gameplay. These objects include energy blockers to restrict access to entrances and exits, large watchtower bases, and Forerunner ramps among other common objects which can be used to make an entirely new base, if you are creative enough to do so. Map effects have been added to the Forge palette, called Forge Filters. These items are found in the other two Legendary map pack maps, Cold Storage and the Mythic map pack.

Avalanche is an almost symmetrical map, with the only differences being the placement of rocks, and a small bridge leading to a small shelf in the canyon, minus the bridge the shelf is almost identical on the other side. There is a mountain that separates the two bases, but there is a path though the mountain creating a T-shape in the U, about mid way though the map there is a tunnel in the upper part of the map that connects the two sides, from that cavern there is a man cannon leading to a lower level that has an exit at the crest of the U. There are Man Cannons placed about the map in such a way that a foot soldier can move throughout the map at a fast pace, though vehicles are still the main choice of transport.

Soon after the release of the Legendary map pack, a variant was introduced to Big Team Battle called Avalanche Heavy. This variant of Avalanche mirrors Sidewinder in many ways by adding scorpions at both bases and adding teleporters in the middle (the U-Bend specifically), along with additional vehicles and weapons, such as a Spartan Laser within each base. Avalanche Heavy can be downloaded here.

Outside view of the red base.

Inside the base, both bases are identical from the inside.

Outside view of blue base. 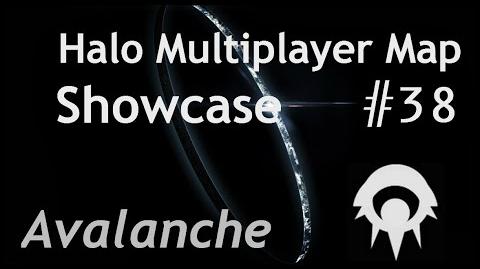