Backwash, also known as War Games Map_Set/: 098-8[1] is a multiplayer map featured in Halo 2. It was added to Halo 2 as part of the Maptacular Pack.

Backwash is a mid sized multi-player level in Halo 2, resembling the Halo: Combat Evolved campaign level 343 Guilty Spark. It is a Flood containment facility set in a large swamp set on Installation 05 which at one point was breached by the flood leading to a formation of a Gravemind.[1] It is actually stated by the developers of Halo 2 that Backwash was originally set on Alpha Halo and based directly on 343 Guilty Spark. It is also stated that they originally had 343 Guilty Spark floating around but decided to change him to 2401 Penitent Tangent because the blue glow of 343 Guilty Spark's eye could too easily be mistaken for a Plasma Grenade flying through the air.

Strangely enough, this trend originally seemed to continue in Halo: The Master Chief Collection as it was the only medium-sized Halo 2 map to not be featured in the Halo 2 Classic or Team Slayer playlists. However, in early 2015, it was finally added to Halo 2 Classic playlist along with several other previously excluded maps.

There is a way to get out of the level, but it requires super-jumping or a Spectre. With a person, get him/her to Superjump over the invisible wall on the hill, then get them to stand on top of the base (red or blue). Get them as close as possible to the wall and then sword cancel up onto a small spot on top of the base. You can now sword cancel (try it a lot) through the wall. Then, walk through something that looks like a large amount of roots (surrounds the outside) and look for edge of the level. Then walk around until you find red ground. The message is very large, written in blood, and says: Looking a little rough out here. (Possibly because of the mold, fog, etc.) Also, go to the far right and there is a message that simply reads, "HERE."

To do it with the Spectre, go to blue base and jump on a small ledge that is right next to the invisible wall. Have the driver put on a severe handicap (if you don't have an overshield) then ram into you. If done correctly you will be smashed through the invisible wall.

Try to limit use of all Covenant weapons on this map, as the fog shows the plasma bursts very easily. This especially means either not using the energy sword at all, or keeping it hidden until right before you attack. And no, using the invisibility power up on the level will not solve this problem, seeing as in Halo 2 energy swords are still visible no matter what you do.

A caption of a multiplayer match on Backwash.

The Central structure of Backwash

A view of the map
Add a photo to this gallery 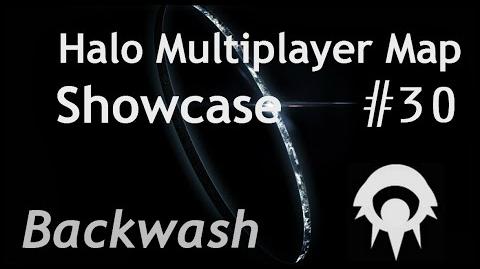 Retrieved from "https://halo.fandom.com/wiki/Backwash?oldid=1789226"
Community content is available under CC-BY-SA unless otherwise noted.