Were you looking for Firebase, a UNSC structure in Halo Wars?

A base is a generic stronghold in Multiplayer games or Campaign missions. A base may be a building or a certain area, and its importance may vary depending on a mission or game.

Usage of bases usually varies depending on a mission or multiplayer gametype. Usually, a base is used to provide protection, or contain stronger weapons or equipment.

Throughout the game series, bases may contain:

Although bases are mostly used for CTF, they can be particularly useful in Oddball (to hide in, if nav points are disabled) and King of the Hill. Bases range from small rooms all the way to a huge tower with mini buildings. For example, in the map Infinity, one team also has a sub-base, quarter way to their destination.

In Halo: Combat Evolved, bases are very symmetrical and fair-shaped. For example, in the multiplayer levels Battle Creek and Blood Gulch, the bases are literally exactly the same model, with the exception of different colors, to mark the bases. Also to be noted is the lack of texture on these bases.

Halo 2 bases are much like Halo: Combat Evolved's bases, except with different makeovers, smoother designs, and better weaponry.

Depending on the map, bases can be radically different or exactly the same. The base usually contains weapons such as Assault rifles, Battle rifles, and a Sniper rifle.

As with Halo 3, the equipment bases have is according to map, as per the newly made Forge 2.0 though, the bases can all be radically different and don't particularly have to make sense.

Bases in Halo 4 seem to have a much larger effect in gameplay. Similar to Halo: Combat Evolved, Halo 2, 3, and Reach, the bases are used for objective-based modes like Territory Control and Capture the Flag. But now, thanks to the Dominion gamemode introduced in the multiplayer of Halo 4, bases have a much more significant impact with defense turrets, built cover, vehicles, and the fact that the actual base is the point to capture. ​ 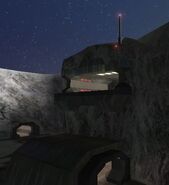 The Sidewinder red base.

The Battle Creek red base.

The Danger Canyon red base. 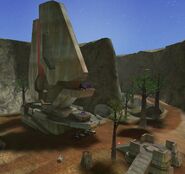 The Infinity red base.

Retrieved from "https://halo.fandom.com/wiki/Base?oldid=1750896"
Community content is available under CC-BY-SA unless otherwise noted.