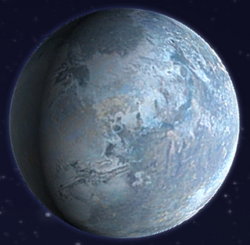 Basis is the largest of the 12 moons orbiting the gas giant planet Threshold in the Soell system.[1] Its diameter is 23,848 km (14,818 miles),[2] almost double that of Earth, but with the same surface gravity. Installation 04 was positioned in the L1 Lagrange point between Basis and Threshold.[1] After Installation 04's destruction, the Covenant Heretics built a makeshift camp on Basis amid its wreckage.[3]

The atmosphere of the moon produces a twilight appearance, with hazy clouds and an orange skyline.

Retrieved from "https://halo.fandom.com/wiki/Basis?oldid=1798649"
Community content is available under CC-BY-SA unless otherwise noted.