Battle Canyon is a multiplayer map from Halo: Combat Evolved Anniversary and the Anniversary map pack for Halo: Reach. The map is a cosmetic remake of the Halo: Combat Evolved map, Battle Creek and the Halo 2 remake, Beaver Creek. 343 Industries as well as Certain Affinity added sections to Battle Canyon to increase the flow of the Halo: Reach sandbox (e.g., Jetpack, Sprint) by adding rock tunnels in the middle of the map and back end alleyways that include the classic two-way teleporters at each end of the two bases. It also replaces the classic Beaver Creek teleporter placement with a UNSC wind lift.

All the new additions are forgeable, by adding rocks to block the side caverns, and by adding walls to the alleyways. Also, by removing the lifts and placing the teleporters where they once stood back in 2001 or 2004. 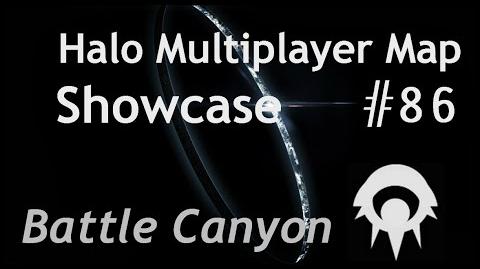 The front of blue base.

Battle canyon view over the horizon.

Another shot of Battle Canyon.