The Battle of Ealen IV was a relatively small-scale conflict that took place on the surface of Ealen IV on March 5, 2558.

On March 5, 2558, a joint UNSC-Sangheili fleet arrived over Ealen IV. Admiral Hood, Captain Lasky and Kaidon Thel 'Vadam travelled to the surface, each with a military escort, where they rendezvoused with the Jiralhanae Chieftain Lydus. The delegates met to negotiate peace between the Sangheili and the Jiralhanae. During the talks, a strike team of Sangheili Rangers infiltrated the hall, killing the Sangheili's troops and placing charges along the outside wall of the council chamber. Commander Palmer, who was attempting to communicate with the UNSC Infinity through Ealen IV's powerful nuclear storms, found one of the dead Commandos while trying to obtain a signal. She rushed back to the council chamber while trying to warn Spartan Scruggs, but was interrupted when the council chamber was blown apart.

The lance of Sangheili Rangers then burst into the ruins of the council chamber, attempting to kill the delegates. Commander Palmer arrived in time to save the delegates from the first wave of enemies. As she and the rest of Fireteam Jackknife escorted the delegates to the waiting diplomatic shuttle, Fireteams Bailey and Majestic reported that there was a massive army of Vata 'Gajat's mercenary group attempting to break into the building. Knowing that Infinity's diplomatic shuttle was nearby and still ready to take off, Palmer had DeMarco and Fireteam Bailey clear a path through enemy forces. Once free of the ruins of the council chamber, the Spartans led the delegates towards the waiting diplomatic shuttle. Before they could board, a wing of Banshees destroyed the craft, cutting off the delegates' only form of escape. Admiral Hood attempted to raise the Infinity, but was still unable to due to the strength of the perpetual electromagnetic storm raging in Ealen IV's atmosphere. Palmer located an old abandoned parts depot nearby and Lasky led the group inside. DeMarco locked the door behind them.

As the party made an attempt to escape the depot and head for a redoubt not far from their location, they were confronted by a Covenant Lich. After a short battle took place, leading to the Lich's destruction, DeMarco and Fireteam Bailey were ordered to stay behind as protection to the Ambassadors while Fireteam Jackknife was ordered to scout ahead with Jiralhanae and Sangheili bodyguards to ensure the redoubt was secure enough for them to take shelter in.[2]

When the party had entered the redoubt, Palmer ordered DeMarco and Fireteam Bailey to sweep the courtyard for anything they could use to defend themselves. They discovered an old Covenant tug that they could use for their escape, but it was too small to carry everyone and ten Heavy Jul 'Mdama's Covenant Cruisers were bearing down on the redoubt. DeMarco stayed behind and used an old AA Cannon with no targeting system to defend the tug as it traveled back to the Infinity, successfully stopping Jul 'Mdama's Covenant from destroying the tug but sacrificing his life.[3] 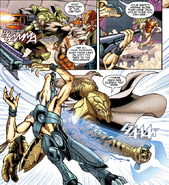 Lydus and Thel 'Vadam escorted by Spartan-IVs, Sangheili and Jiralhanae.
Add a photo to this gallery

Retrieved from "https://halo.fandom.com/wiki/Battle_of_Ealen_IV?oldid=1811620"
Community content is available under CC-BY-SA unless otherwise noted.