Fall of Reach, Battle of Tribute

The Spartan Team Black was deployed on a covert mission to gather intel and disrupt Covenant supply routes in Sub-Sector 35 on board the ONI-commissioned vessel Long Time Coming. Meanwhile, the CAS-class assault carrier Clarity of Faith was set to renzedvous with a supply convoy nearby. While both vessels were on their way to their destinations, they passed near the unidentified moon and were shot down by Line Installation 1-4's automated defenses. Both ships ended up crash-landing on the moon, and most of their crews were killed.[1]

After assessing the situation, Team Black noted that the moon did not possess a breathable atmosphere, and discovered that there was an underground complex with breathable air nearby. Black-Two remained on the ship to send a distress call, while the rest of the team moved outside to find a way to the underground facility. Meanwhile, some of the surviving the Covenant forces led by Shipmaster Thon 'Talamee took a Wraith, heading for the same destination as the Spartans. The two soon engaged each other, but were interrupted by the sudden appearance of mechanical Gatherers.[1]

The machines engaged both parties and captured Black-One, Reff 'Talamee, Jubub as well as a Mgalekgolo, and then headed toward the Line Installation's entrance. Black-Three and -Four pursued, making it inside but losing the Gatherers. As the Spartans and the Covenant had a common enemy and goals, the two made an uneasy ceasefire until they could rescue their comrades. Meanwhile, deep inside the facility, the captives were brought into holding cells and were greeted by the installation's Monitor, 686 Ebullient Prism, who informed them that they would be vivisected and cataloged in order to find an immunity to the Flood.[2]

As the rescue party advanced deeper into the facility, they split up. The monitor begun to consider them a serious threat, and in order to stop them, it decided to manipulate them into turning against each other. First, Prism hacked into the HUD of Black-Two, who had just arrived into the facility after sending out the distress call, making the two other Spartans appear to her as Covenant. Similarly, Black-Four was tricked into believing Two to be Thon. They engaged each other and Four shot Two in the head, knocking her unconscious. Prism then hacked into Team Black's AI construct Iona and attempted to terminate her.[3]

As a result of Prism's manipulation, Black-Three attacked the Covenant forces who arrived to his location, thinking it had been Thon who shot him. While this confusion was cleared quickly and the two parties barely maintained their truce, the situation was complicated when Four was reminded of a long-forgotten animosity against Three and began attacking him in blind rage. Meanwhile, One and Reff managed to break out of their cells. The two escaped through the facility's halls, successfully evading and even blinding the Monitor. They eventually found their way into the installation's control center.[4] From there, Reff contacted Thon, telling them to head to his position. Three and Four were still fighting each other and the Covenant decided to leave them be. One then contacted her Spartans, and found that they were engaged in a brawl while Two was still unresponsive. It took One, Three and Iona to eventually bring Four back to his senses.[5]

As Three and Four moved out toward the control room, Thon's forces were already there. As he had now retreived his brother, Thon decided that the truce was over and had a Mgalekgolo smash an unsuspecting Black-One into the console. Thon then noticed a Covenant supply convoy approaching their position - the same one they were supposed to contact before they got shot down. Thon began planning on how they could contact them and High Charity for teams to retrieve the artifact, but it soon became clear that Reff had plans of his own; claiming he had been guided by destiny toward this moment, he preached that he would establish a "new Covenant" and shoot the Hierarchs' servants down. Thon refused to listen to his brother's heresy and proceeded to kill him, but Reff had stolen his energy sword and impaled Thon.[5]

As Reff began re-targeting the facility's main weapon to fire on the Covenant fleet, Prism arrived with an army of Sentinels and Gatherers and vaporized the Sangheili. Meanwhile, Black-One regained consciousness and Black-Three, Four and finally, Black-Two, arrived at the chamber. The Spartans and the remaining Covenant fought the Forerunner machines, until Prism was the only one left. Team Black concentrated their fire on the Monitor, which then flew into the path of the installation's main weapon and was vaporized as Black-One fired it from the command console. The pulse fired into Slipstream and brought the entire approaching Covenant fleet down on the moon's surface. Team Black then made its way back to the facility's entrance, and moved outside to fight the remaining survivors from the crashed Covenant vessels in order to find and commandeer a vessel with a functioning Slipspace drive.[5] 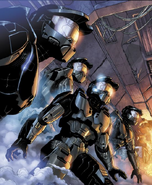 Team Black in the cargo hold.

Black-One is captured by a Gatherer.

Black-Three and -Four barely make it into the Line installation.

One fires at Prism with a Gatherer's energy beam.

Three and Four duel in the installation. 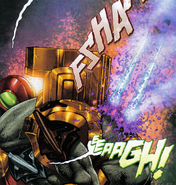 Reff kills his brother.
Add a photo to this gallery

Retrieved from "https://halo.fandom.com/wiki/Battle_of_Line_Installation_1-4?oldid=1789312"
Community content is available under CC-BY-SA unless otherwise noted.