Battle of the Great Bear

The Battle of the Great Bear [1](also known as the Battle of Groombridge-1830) was a major battle in the early years of the Human-Covenant war.

The human fleet, consisting of 17 ships, engaged 3 Covenant warships, destroying the enemy force but losing a total of 11 Destroyers in the process. Two of the Covenant ships were destroyed directly in combat, while the third crash-landed on a planet's surface.

A Sangheili survivor was recovered and interrogated personally by Admiral Cole himself, allowing the UNSC to finally learn something about their enemy - that the Covenant were wiping out humans because they had been deemed "unclean."[1] More importantly, Cole discovered that the Covenant were largely unaware of the size and whereabouts of humanity's interstellar empire, leading to the formulation of the Cole Protocol.[2] 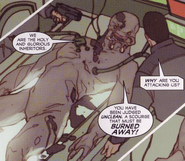 Admiral Cole interrogates a Sangheili prisoner.
Add a photo to this gallery

Retrieved from "https://halo.fandom.com/wiki/Battle_of_the_Great_Bear?oldid=1789350"
Community content is available under CC-BY-SA unless otherwise noted.