Battlegroup 4 was a formation of the Colonial Military Administration.[1] On October 7, 2525, it operated under the command of Captain Maribeau Veredi. It was sent to investigate unknown aggression on the outer colony world of Harvest.[2]

After communications was lost with the UEG colony Harvest, the scout ship CMA Argo was sent to investigate. It arrived in-system but was lost shortly after. In response, the CMA organized Battlegroup 4 to investigate Harvest.

When the battlegroup arrived, it discovered the Covenant ship responsible for the massacre of Harvest and destruction of the Argo. Captain Veredi followed first contact protocols, but the Covenant ship suddenly opened fire. The battlegroup returned fire, but its Archer Missiles seemed to have no effect. Soon, the Arabia and Vostok were destroyed, and the Heracles was severely damaged.

Before leaving, the Battlegroup picked up a transmission in English from the Covenant ship: "Your destruction is the will of the gods, and we are their instrument." The Heracles retreated into slipspace, and when it returned to UEG territory, Veredi informed the UNSC of what took place, and a larger battlegroup was assembled by Preston Cole to retake Harvest. 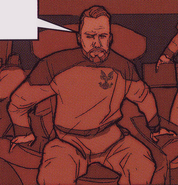 Captain Maribeau Veredi, the commander of Battlegroup 4.
Add a photo to this gallery

Retrieved from "https://halo.fandom.com/wiki/Battlegroup_4?oldid=1801638"
Community content is available under CC-BY-SA unless otherwise noted.