Beaver Creek, also known as War Games Map_Set/: 250-5[1] is a multiplayer map in Halo 2. It is set in a tiny canyon featuring two symmetrical bases that are separated by a small creek. Beaver Creek is a remake of the map Battle Creek from Halo: Combat Evolved. This map was remade in Halo: Combat Evolved Anniversary as Battle Canyon.

Two bases lie on opposite sides of this small map, separated by a small stream. Above the stream a giant rock walkway leads to a Rocket Launcher.

On the left side of each base a path leads to the upper portion of the map. On one side the path leads to a small cave housing a Sniper Rifle (Blue side), on the other side this path leads to another small cave which houses a Magnum (Red side). Upon exiting the cave with the Magnum a small ledge is visible which gives you access to the Rocket Launcher. The bases on this map consist of multiple entrance points. Each has an underground entrance out front and on the left sides that connect underground and lead up to the hallway that is accessed by the main front entrance.

All hallways eventually lead to the main room which, depending on the game; will house either the bomb planting site or the flag. Both bases have two way teleporters at their rear. At both sides of the bases the roof can be accessed by either the rocks that are sitting there or by the stonewalls. Two glass windows are used to gain access to the base from the roof. One window is above a hallway near the lower entrance and the other is above the main room.

Red Base of Beaver Creek.

Blue Base of Beaver Creek. 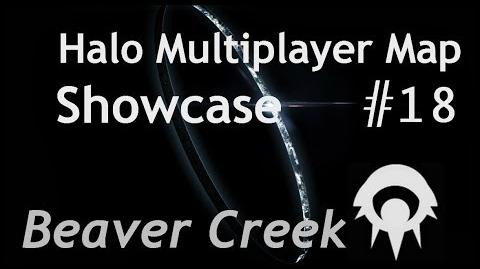