Blackout,[2] also known as War Games Map_Set/: 037-2,[3] is a multiplayer map featured in Halo 3 and is a remake of the Halo 2 map, Lockout. It is featured as one of the three maps in the Legendary map pack that became available on April 15, 2008.

Rather than a Forerunner facility, like its predecessor, the map takes place in the Arctic[1] on Weather Station Z/41. The map is built around a helicopter pad, branching off of this pad in all four directions are buildings, each building has an upper and lower level, and two of them have an even higher floor. These two towers have been dubbed the "Sniper Tower" and the "BR Tower" as these are the weapons which spawns atop each of them. The Sniper Tower (where the Sniper Rifle spawns) is the smaller of the two, and the BR Tower is the larger. The other two buildings consist of a walled room that leads to the BR Tower, and a tall building that has an "Air Lift" in it. The Air Lift building has an exit at the Helipad and the lower level. To reach the top of the building you ride an Air Lift; a large fan which propels air, and you, upwards.

Blackout's code name was Moonlight Sonata during its development due to the level's dark night-time sky, and as an allusion to one of Beethoven's works. It replaces Assembly in the Halo 3 Legendary map pack. Assembly was included in the Mythic map pack. Rather than the blue gravity lift that was featured in Lockout, Blackout has a red airshaft, which appears to fit the atmosphere better.

In the second most recent ViDoc, multiple forge items from Blackout were revealed. They include detailed staircases, man-cannons, standard doorways, portals, and blocking doorways, shield doors, and newly edited shipping crates that stay once they are placed. Another new object is the FX filter. Using these will change the tint, contrast, brightness, and overall color of the map, and it is recommended to experiment. You may combine them, to make cool effects. The barracks on Blackout contain a basketball hoop, and the Battle rifle tower is now featured with windows compared to being fully opened. 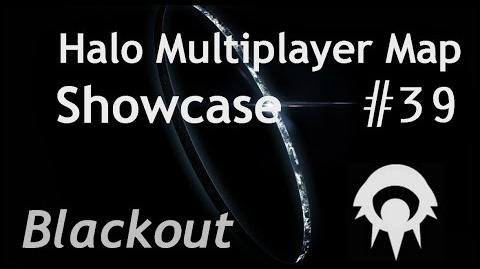 Retrieved from "https://halo.fandom.com/wiki/Blackout?oldid=1789432"
Community content is available under CC-BY-SA unless otherwise noted.