This article is about the original Halo: Combat Evolved map. For more uses of the term Blood Gulch, see its disambiguation page.

“The Quick and the Dead.”
— Blood Gulch's description

Blood Gulch is a multiplayer level in Halo: Combat Evolved. It is set in an enclosed, semi-symmetrical canyon with a base at either end and an open field between. The level supports vehicles and is recommended for 4-16 players. The level is almost entirely void of life, save some sparse grass and bushes. Blood Gulch is easily the most famous multiplayer level from the original Halo.

Blood Gulch was remade as Coagulation for Halo 2 and Bloodline in Halo 2: Anniversary, and served as a major inspiration for Valhalla in Halo 3 as well as Ragnarok in Halo 4. It was also remade as a multiplayer map in Halo Wars, and made its return in Halo: Reach as Hemorrhage with a new and hugely expansive playable area outside of the main canyon, and is a main section of Forge World.[1]

Blood Gulch is set in a vast canyon with two bases, a huge open field with hills and ditches, and caves and cliffs along the rock walls. In addition, there are Teleporters located on each base's roof. Each will transport players to the center field. Red team has the advantage of utilizing a ledge near Red Base which is an ideal spot for sniping while Blue team has the advantage of surprising the Red team via tunnel access located on the side of the map.

Blood Gulch has been remade more times than any other map in the Halo Franchise. There have been 5 iterations of Blood Gulch including the original, compared to three versions, the highest amount any other map has achieved. As well as having been remade a record amount of times, it also inspired a number of maps and has been included in some form in all Halo games excluding Halo 3: ODST, Halo: Spartan Assault and Halo: Spartan Strike.

It was remade as Coagulation for Halo 2, with the bases excavated to provide more room, as well as a number of other minor differences, such as the addition of an extra hole in the caves, for quicker and easier travel.

The Blood Gulch concept was later reworked into Valhalla for Halo 3, featuring a similar size and layout, but with dramatic changes in the terrain and the base structures.

A map called "Blood Gulch" was included in the real-time strategy game Halo Wars, and is somewhat accurate to the original, though it lacks the caves, since those would be hard to implement in an RTS. Unlike the original, this map has rotational symmetry, and while the theme remains the same, many changes have been made out of necessity.

Blood Gulch was also remade for use as a multiplayer map variant, Hemorrhage, in Forge World in Halo: Reach. It was revealed in a special episode of Red vs Blue. The map is slightly larger in size and features the original Blood Gulch bases with the canyon from Coagulation.

Blood Gulch's spiritual successor Valhalla was later remade as Ragnarok in Halo 4. Very few changes were made, aside from tweaking the weapon and vehicle layouts.

In Halo 2: Anniversary, Coagulation was remade as Bloodline. Bloodline adds two bridges, a central structure, edited base layout and some minor geometry changes, as well as a revised vehicle and weapon layout. The map's structures are no longer Forerunner in design, but instead are UNSC in origin. Otherwise, the map remains true to Coagulation.

Halo 5: Guardians features three versions of Blood Gulch, all of them Forge maps. The first is Basin, a Big Team Battle map built on Alpine by 343 Industries. According to 343, it takes inspiration from Blood Gulch and its Halo 3 spiritual successor Valhalla, but is its own standalone map. The second is the community-made Big Team Battle map Viking, which is a 1:1 remake of Valhalla with only a few slight tweaks made. Finally, there is Blue vs Red 2003, a Grifball court which features a much scaled-down recreation of the original Blood Gulch beneath the translucent grid which forms the court floor. The map is more of a tribute to the popular machinima series Red vs Blue than a faithful recreation of the map, but nevertheless can be considered to also pay homage to Blood Gulch. 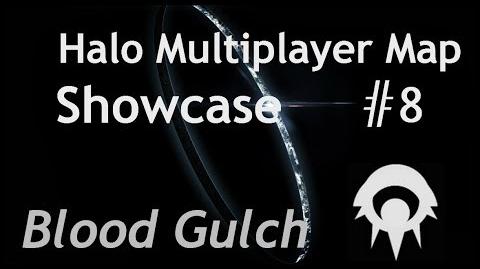 Retrieved from "https://halo.fandom.com/wiki/Blood_Gulch?oldid=1814149"
Community content is available under CC-BY-SA unless otherwise noted.