Blood Gulch is based on the Halo: Combat Evolved level, Blood Gulch, as well as the Halo 2 multiplayer map, Coagulation. Blood Gulch is set in a vast canyon, a huge open field with hills, cliffs, and ditches, and cliffs along the rock walls. There is some vegetation, but the terrain is mostly desert-like.

To win, it is recommended to capture Rebel Bases. There are two: one near your base, which is North-West, and one on the far right is a hill with Rebel soldiers and snipers. You can use the teleporters to get there quicker. Bring a handful of troops to the hill because the snipers are very powerful.

When you kill the Rebels, take that position. Leave a group behind and move a powerful group (with tanks and aircraft if you set up a base for them) to the enemy's base. Destroy it and scout the remainder of the map for any enemies left (do not take the group you left at the once rebel base).

The bonus reactors are valuable on this map. Nearby is a supply elevator with sniper towers, making it a free energy upgrade and extra supply boost, beware the Rebel troops defending these structures.

As seen in an OXM magazine article, and on a few websites, editors from OXM visited Ensemble Studios, and were able to play on a multiplayer called "Blood Gulch."

In the magazine, it states that it is clear the map is based on the Halo: Combat Evolved map Blood Gulch. With the release of Halo Wars, this map is confirmed as being called Blood Gulch.

Changes from Blood Gulch and Coagulation 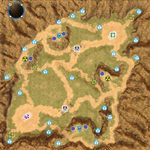 A strategic map of Blood Gulch.