Bungie LLC, formerly Bungie Software Products Corporation prior to its emancipation from Microsoft, is a video game developer founded in 1991. They are the creators of Halo, as well as other video game series.

For much of the 1990s, they developed a series of increasingly technically detailed First-person shooter (FPS) games for the Macintosh, the most famous being the Marathon series, following this with the acclaimed Myth tactical-combat series for both the Mac and Windows. Bungie games were particularly well-loved by players due to their complex backstories which often left more mysteries unexplained than revealed.

In 1997, Bungie Studios established Bungie West, a studio in California. However, the studio didn't last long and was shut down in 2000. Bungie West's only game was Oni.

Creation of the Halo series

In 1999, Bungie announced that their next product was a return to the FPS genre, with world-beating physics and AI system, to be known as Halo and to be released at the same time on both the Mac and also Windows. On June 19, 2000, Microsoft announced that they had acquired Bungie Software and that Bungie would become a part of the Microsoft Game Division (subsequently renamed Microsoft Game Studios in 2002, and later simply Microsoft Studios in 2011) under the name Bungie Studios. The original versions were soon delayed and the game was re-purposed for the Xbox, with the Mac and Windows versions only shipping two years later when it was no longer the renowned product it would have been in about late 2000. The Xbox version of Halo received the Game of the Year and Console Game of the Year awards for 2002 from the Academy of Interactive Arts & Sciences, is known as a system seller, and as of 2004, is still a video game bestseller. Halo: Combat Evolved has been one of the most critically acclaimed games over the last three years, and its sequel, Halo 2, has been called the 'most anticipated game of all time' by IGN Xbox.

On October 5, 2007, Bungie and Microsoft announced an end to their partnership, effectively making Bungie an independent company once again, now titled Bungie LLC (limited liability corporation). The Halo Intellectual Property (IP) remains with Microsoft. Bungie employees have mentioned that there have been 'few noticeable changes' after the split.

Their offices were originally based in Chicago, Illinois. After Microsoft's acquisition, they moved into the Microsoft Campus at Redmond, Washington. They have more recently moved to Kirkland, Washington.

On April 29, 2010, Bungie entered an exclusive 10-year partnership with Activision, which will have exclusive, worldwide rights to publish and distribute all future Bungie games based on the new intellectual property (Destiny) on multiple platforms and devices. Bungie will remain as an independent company, and will continue to own the Destiny intellectual property.[2]

“Some of you may be wondering - "What's up with this unhealthy obsession with the number 7?" This page offers some insights.”
— Luke Smith[3]

Bungie, like many production companies, puts references to older games in newer games. Unlike others, many of these references hint or imply that a great deal of Bungie's games operate in similar or identical universes. Most well known of this is the connection between the Marathon universe and the Halo universe, which share a great deal of similar names and themes (see List of Marathon references in Halo).

While most believed that Bungie would never add a direct connection between these two games (just as they did not for Marathon and Pathways into Darkness), its interesting to note that the I Love Bees puzzle did add a substantial connection between the Marathon universe and the Halo universe: Rampancy can happen to AIs in both universes.

Another interesting fact about Bungie is their use of the number seven. Many of these are more obvious than others, including 343 Guilty Spark (7 x 7 x 7 = 343), Pfhor Battle Group 7, and their official fan club, the 7th Column, but some of these are amusingly subtle: the Marathon colony ship was a hollowed out Deimos - first discovered in 1877 and first photographed in 1977.

Bungie as a company has developed its own complex and diverse mythology in addition to that in their games. Several of these include:

Many of Bungie's employees have left the company to form their own studios. Double Aught was a short-lived company comprised of several former Bungie team members, founded by Greg Kirkpatrick. The company helped Bungie develop Marathon: Infinity, the last game in the Marathon series.[4]

Wideload Games, creator of Stubbs the Zombie in "Rebel Without a Pulse", is another company that came from Bungie; It is headed by one of the two Bungie founders, Alex Seropian, and 7 out of the 11 employees previously worked at Bungie. Other companies include Giant Bite, founded by Hamilton Chu (former lead producer of Bungie Studios), and Michal Evans (former Bungie programmer), and Certain Affinity. Founded by Max Hoberman (the multiplayer design lead for Halo 2 and Halo 3), the team of nine includes former Bungie employees David Bowman and Chad Armstrong (who later returned to Bungie) as well as folks from other developers. It collaborated with Bungie in releasing the last two maps for Halo 2.[5]

The Bungie team, with Peter Jackson.

All of Bungie's characters from Mythic to Halo. 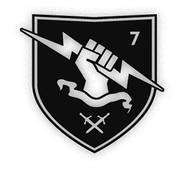 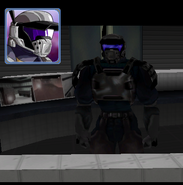 The Black Ops fighter, from Bungie's game Oni. There's a slight similarity between him and a Spartan.