Burial Mounds is a Halo 2 Multiplayer map established on Basis. After the destruction of Installation 04, the Heretics used it as a surrogate and stand-in base.

As this map is set after Alpha Halo was eradicated by John-117, "chunks," varying in size from gigantic landscapes to small scraps of metal, of the Installation are raining down on the surface of the moon Basis. Two huge chunks of twisted metal dominate the horizon already, and flaming fragments enter the atmosphere frequently. The map is ideal for 4v4 and the most popular gametype is Team Snipers, though the map is also ideal for One Flag and Assault.

The gully runs along a side of the map with the offensive base at one end. Many boulders lie inside making for many hiding/cover areas. A bridge spans the gully in the middle and a Rocket launcher has a default spawn on top of the bridge. Towards the back of the gully near the base, chunks of the Halo form a shadowed area where a Beam Rifle can be found. A Warthog spawns near the base.

Metal walls form over this area to what would look like a rib section of the map. It provides good cover from the turrets of the defensive base.

This cave along the back of the map has two entrances on the back wall. An Energy Sword can be found in the middle of the cave. ‎

The center of this map is mostly bare, except for a pillar of burning metal. A Ghost is usually found at the base of this pillar.

This base has three walls and a bridge to the front of the map. There are two windows one large window opens to the center. Another higher window overlooks the Gully. It has two Gun Turret placements on each window. A UNSC Sniper Rifle is at the back of the bridge.

The first Multiplayer image of Halo 2, in its alpha state.

The third multiplayer image Of Halo 2 in its beta state.

A Multiplayer match on Burial Mounds.

Another view of Burial Mounds. 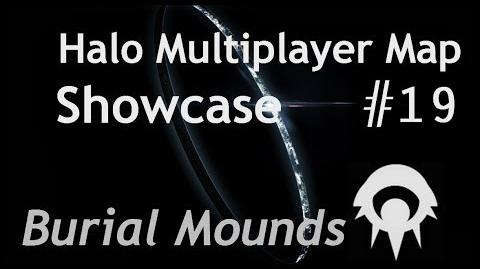