Were you looking for the Halo 2 level Cairo Station, or the achievement of the same name?

Cairo Station (HCS: OWP-142[1], REG: 73262.302_A[3]) was an Orbital Defense Platform in geosynchronous orbit about 35,900 kilometers above Earth over the Egyptian city of Cairo. It is in the same battle cluster as Athens Station and Malta Station. It was commanded by Fleet Admiral Sir Terrence Hood.

Construction on Cairo Station began on August 23, 2550 and was designed by Lead Engineer Alexander Kerr-Fox and Dr. Stephen Loftus.[1] Between May 14-19, 2552, Fleet Admiral Harper deployed the UNSC Chevalier and her security teams to assess the station. This was in preparation for the station's use by Terrence Hood as the headquarters for the Earth Defense Coordination Zone.[4] Cairo went fully operational on September 14, 2552.[1]

“They're going to try to take our MAC guns offline, give their capital ships a straight shot at Earth. Master Chief, defend this station!”
— Lord Terrence Hood to John-117 at the beginning of the battle of Earth.[5]

On October 20, 2552, John-117 received his MJOLNIR Mark VI armor in the Cairo armory prior to attending an awards ceremony on the station's command center.[6] The ceremony was interrupted by the Battle of Earth when thirteen Covenant CCS-class battlecruisers and two CAS-class assault carriers attacked Earth. They tried to break through the Cairo's battle cluster by sending boarding craft to plant bombs on the stations to destroy them. Fleet Admiral Hood commanded the UNSC forces from the station during the attack. Unlike the Athens and the Malta, Cairo survived the Covenant attempt to detonate a Covenant Bomb on board. In an ironic twist, the bomb was located and used by John-117 to destroy a Covenant assault carrier.[5]

When SPARTAN-117 returned later to Earth on November 17, 2552, Cairo was still intact, but appeared damaged from the battle. Lord Hood was still on board and in command of the escalating Battle of Earth. The Cairo, the other MAC platforms, and three UNSC fleets held firm against the onslaught of the Covenant Loyalist forces. Cairo ultimately survived the Battle of Earth.[7]

“When I shipped out for Basic, the orbital defense grid was all theory and politics. Now look! The Cairo is just one of three hundred geosync platforms. That MAC gun can put a round clean through a Covenant capital ship.”
— Sergeant Johnson[6]

Cairo Station's main purpose is as a defense station for Earth. Its main armament is a Mark V "Super" MAC gun, capable of causing severe damage to even a shielded Covenant Capital Ship with a single hit.[6] An AI such as Cortana can operate the station's MAC gun.[5] The station features 7 M606 Goalkeeper Point Defense Guns on it.[1] Like other ODP's, it likely runs on power transmitted from a planetside generator.[8] Cairo station orbits above the Egyptian City of Cairo, serving the purpose of defending the city from incoming attacks.

Internally, it is very similar to UNSC ships with set out decks and specialized rooms. Like all United Nations Space Command space constructs it featured regular bulkheads for protection against hull breaches but seemed especially adept for fending off boarding parties. It had large stockpiles of Combat Barriers, large supplies of M247 GPMGs, security booths providing defense points and regular weapons lockers in the walls containing Battle Rifles and SMGs.[5] These extra defenses against boarding parties are an obvious precaution, as the ODPs like the Cairo would be large targets for Covenant forces.

A panoramic view of Commons B-01. 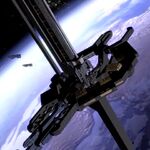 Retrieved from "https://halo.fandom.com/wiki/Cairo_Station?oldid=1812766"
Community content is available under CC-BY-SA unless otherwise noted.