The beginning of The Battle of Earth

Were you looking for the Orbital Defense Platform, or the achievement in Halo 2 Vista?

Cairo Station is the third campaign level of Halo 2, taking place in Earth's orbit on the Cairo Station. John-117 and UNSC Marines fight against boarding Covenant troops culminating in a battle over a Sangheili-guarded bomb intended to destroy the station. This is the first level in which enemies are encountered that you can fight.

John-117 and Sgt. Maj. Johnson step from the tram into a crowd of cheering Marines, robot cameras hover around.

Johnson and John-117 walk to the end of the room, as the Bridge's blast doors open up.

The view changes to High Charity, where Tartarus and two of his Jiralhanae walk the Sangheili Commander, Thel 'Vadamee, out onto a ledge on High Charity. Sangheili Honor Guardsman are stationed on either side. Covenant Unggoy, Kig-Yar and Mgalekgolo have gathered on the walkway.

They reach the ledge, in which we see the stadium seats filled with roaring Covenant aliens, and the Jiralhanae fix the Commander's arms onto floating cuffs.

The entire crowd cheers as energy beams hit 'Vadamee on either side, and he shakes with pain.

The view changes back to the Cairo's bridge, dozens of Naval officers cheer as John-117 and Sergeant Johnson approach Lord Hood at the end.

Cortana looks up at John-117 and Johnson.

John-117 and Johnson look at each other.

The view changes back to High Charity, on Tartarus' face.

The view once again changes back to Cairo Station, as a young woman joins John-117 and Johnson.

The view changes back to High Charity again, where a blackened Sangheili Combat helmet falls to the floor, and the naked 'Vadamee hangs limply from his restraints. A glowing brand rises from the floor behind him, and Tartarus grabs it and strides forward.

Thel 'Vadamee raises his head weakly. Tartarus gives him a fierce look, and presses the brand against the Sangheili's chest with malice. The tortured Thel 'Vadamee fights the pain but gives in and screams.

The view once more changes to Cairo Station, where alarms start to sound.

Images of Covenant ships appears on a large screen.

The view shifts back to the screen.

Johnson and John-117 leave the bridge, as Lord Hood turns back to his command station. Through the bay windows looking up to the MAC cannon, the fleet turns to engage the Covenant attackers. Longsword fighters hurtle overhead trailed by Marathon-class cruisers.

Outside, a Covenant Boarding Craft latches onto the hull, causing the station to shake. Weapons fire is soon heard from outside the doorway.

The Marines take up position around a sealed bulkhead. Johnson sets up a stationary gun turret. A bright light and crackling noise, like a welding torch, comes from the center of the door, and is soon followed by an explosion, where the door explodes and Covenant intruders appear.

The Malta Station suddenly detonates in a huge ball of fire, the barrel of the MAC gun breaking loose and tumbling away

The Hangar bay is soon attacked by a new wave of Covenant from another Hangar bay.

Once John-117 finishes killing all the intruders in the second Hangar bay, Covenant Boarding Crafts are seen through the windows retreating, only this time, from the Athens Station.

The Athens detonates and spins apart, just like the Malta.

If the player decides to stall for awhile

John takes a route under the Hangar bay, and encounters another group of Covenant.

As John returns upstairs to the armory, he finds the Master Gunnery Sergeant fighting a pair of Sangheili, armed with a Shotgun. Exactly what he says to them differs depending on what the difficulty level is set to.

The Master Gunnery Sergeant is hit by bolts of plasma and dies.

Another vibration occurs, as another Boarding Craft is attached

John-117 comes to a hallway where Keyes, Johnson, and a couple of officers are engaged in a firefight outside the gangway to the In Amber Clad.

Once they clear the area

John-117 exits the station through an airlock and fights several Sangheili Rangers in the vacuum of space.

John-117 enters back into the Cairo Station, where he is met by Marines near a cargo, and soon the Yanme'e appear.

As John-117 rides the elevator platform down to the airlock.

John-117 watches through the window as the lift descends, a massive Covenant Assault Carrier accelerates right past the Cairo and towards Earth, making the entire station shake.

After crossing the MAC's recoil arm in vacuum, and moving back into the airlock

The station shakes again. Outside the window, Chief can see the second carrier bypassing the Cairo, following the first carrier down to Earth.

Once John-117 clears the room of Covenant defenses.

Cortana's holographic avatar appears on a pedestal near the bomb.

John-117 touches the pedestal, and Cortana downloads directly into his armor. He steps over to the bomb, and touches the flashing red activation pad at its center. It blinks and turns blue.

The view changes to the bridge of In Amber Clad.

The view changes back to the bay, where Spartan-117 is waiting with one hand on the bomb.

The view returns to Cairo's bridge.

In the bay, John-117 grabs the bomb by two of its sharp handles and hauls it across the floor, causing sparks to erupt as it scrapes across the floor. He drags it into an elevator, and rises.

The elevator reaches an empty Longsword launch bay, and John-117 steps out, watching through the huge bay door. The entire fleet streams down toward Earth, chasing the Covenant ships. John-117 then steps up to the door's release handle, which drops down above him.

John-117 pulls down the handle and the bay doors cycle open, the bay decompressing rapidly. Debris lifts off the floor and hurtles into space, and the bomb slowly begins to slide toward the doors, scratching sparks across the floor. John-117 grabs hold of it as it passes, and is pulled out into space.

In free-fall, John-117 descends in the general direction of northern Africa. The first carrier is miles below him, too far to reach. The second carrier passes right below his position, and opens up with a energy projector, narrowly missing him. A cruiser rockets below him, takes an Energy projector round right through its spine, explosions lighting all over its hull. John-117 plummets past it, watches as its engines fail and try to relight themselves.

A pair of Longsword fighters dive past him, and make a strafing run on the carrier. They open fire on the Carrier, and make a staccato beat of fire along the back of the carrier, allowing John-117 to slip through the narrow hole the blasts have created.

The Carrier's center is a huge, open chamber, a massive fusion core casting white light across its inner surface. The carrier has taken a lot of abuse; the far side of the chamber is torn open, showing the Earth outside. John-117 crawls up the bomb, presses its activation panel, and spins around. His legs flex, and he vaults off the bomb, aiming for the split in the carrier's armor.

He plummets from the carrier, straight for Earth, as behind him minor blue explosions flicker up and down the alien warship. A pause, and the entire ship detonates in a huge plasma conflagration.

As John-117 falls towards Africa, a UNSC Frigate passes beneath him, matching trajectories.

Johnson looks at Keyes and grins.

In Amber Clad banks hard and dives towards the Earth's atmosphere, and a massive, gray city along the East African coast comes into view.

John-117 outside the station, in the vacuum of space. 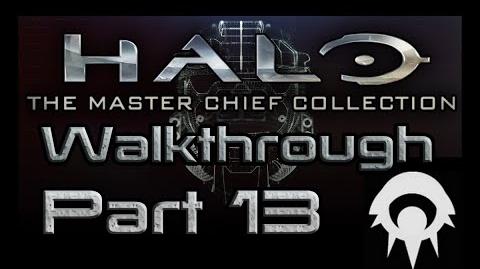