Chasms is a multiplayer map for Halo Wars, set on a frozen region on Harvest, surrounded by mountains and mysterious Forerunner Structures.[1]

There are two main bases present in Chasms. There are also two Forerunner Supply Elevators and two additional rebel bases to destroy near the 2 main bases, both being guarded by several rebel squads.

Some of the terrain is Forerunner architecture, such as metal floors with smooth textures with Forerunner patterns, much like the designs on the outer side of the Halo Installations, and Forerunner walls on the edges of the map. There are also many chasms present in the map, hence the name.

Due to the small size of the map, the resources scattered about are plentiful and very often close together. This encourages a Temple 1st build, in order to get your leader out faster and collect the supplies. When the Temple finishes building, it's best to queue up your special unit immediately. Whether it be a Suicide Grunt, Elite Honor Guard, or Brute Squad, the special unit will help your leader capture the supply hook on your side of the map. Send your leader to the aforementioned supply hook and get him very close to the garrison. Then teleport your special unit through, and garrison it ASAP. Then move your leader away to make the Rebels target your garrisoned unit. Move your leader back in and kill them while they're shooting at the garrisoned unit. During this, it's best to keep up production of both your Special units and Warehouses. However, if you're playing as the Arbiter, only one Suicide Grunt is necessary. This is also the case if you are playing as the Prophet against a UNSC player. Honor Guards are only good against other Covenant players, as the UNSC will easily be able to kite their Warthogs to avoid damage from your Honor Guards. If you are playing against a Covenant player, build a Hall 5th and produce Jackals. If you are playing against a UNSC player, build a Factory 5th and build Wraiths. You will also want to upgrade your leader at around this time.

Vs UNSC: If you are playing as the Brute Chieftain, make sure to garrison Brutes in the sniper towers next to the supply hook. This prevents the enemy from being able to Pelican over a group of Flamethrowers to take over your hook. However, if you are not playing as the Brute, then it's best to keep a Wraith nearby instead. Suicide Grunts are not as suited for combat (and are more expensive than Brutes), and Honor Guards cannot attack while garrisoned. After you've produced as many Wraiths as you feel necessary, recycle the Factory, build a Warehouse in its place and queue up Citadel. Keep the amount of Wraiths you build to a max of 4. 2 is the best amount, since if you build any more, they become difficult to keep track of and are easily hi-jacked by Spartans. Once you get Citadel, build two Summits. You should also keep producing Brutes (if you are the Chieftain that is)- the whole idea of this strategy is to force the enemy to build Flamethrowers and then counter with Banshees. Get your leader to the enemy hook and port in your Wraiths and Brutes/Honor Guards (If you're playing as the Arbiter, you don't need supplementary units as you can just Rage). After you have both hooks, mass Banshees and then push on the enemy base.

Vs Covenant: Once you have your Hall up, build Jackals and get your leader to the enemy hook. Once there, port through your Jackals. However, don't port them all through, because your enemy is most likely pushing on your own hook as well. If they do that, wait until their leader leaves and then send the Jackals that you didn't port to your leader to go take the hook back. Always be scouting to see when your enemy gets Citadel. You want to time your Citadel around the time when they get it. Get a second Hall up and double pump Jackals. If you manage to get both hooks, many players will often ditch Jackals and try to double pump Banshees. If they do this, get tech 2 ASAP and get Vampires. Also, build two turrets and upgrade them to anti-air. They will try to timing push you in order to destroy your Summits before you can produce Vampires, but the AA turrets will thin their numbers and allow you to push them off. If this happens, they will be defenseless and might as well resign.

A common build order goes like this: Supply Pad, Barracks, Supply Pad, Supply Pad, Reactor. This is a good build against other UNSC, as it allows you to get Gunner Hogs by 3 minutes, and allows you to field a lot of Flamers for map control. By 3 minutes, you should have taken your hook and fielded 5 Hogs. Harass the enemy, but be sure to look out for the opponent's Hogs. Don't let them get a good engagement; remember to drive away from them if they try to attack your Hogs. They're more accurate when they're firing backwards. If they chase you, they will take more damage then they will be able to dish out. If they don't, then just turn around and keep trying to bait them. Meanwhile, be massing Flamers. You'll want to Pelican them over to the enemy hook and take it. As you Pelican the Flamers, position your Hogs in a way to destroy the enemy Pelican before it can unleash the Flamethrowers. If your opponent is any good, they'll try the same thing. However, if you manage to capture and hold both hooks, you'll be able to more easily afford Fortress and directly afterwards get tech 2. Once you have tech 2, get a Vehicle Depot and Grenadier for your Hogs. From there, build tanks and, if you happen to be playing as Anders, Gremlins as well. After you have a comfortable amount of units, tech 3 is an option. However, getting an expansion isn't a bad option either. From there, it usually degenerates into a tank war. In order to turn the tides into your favor, it's recommended that you upgrade your leader power. Don't forget about your Cryo/Carpet /Mac. It is what will win you the match in a late-game scenario.

A different build order is recommended against the Covies: Supply Pad, Reactor, Supply Pad, Supply Pad, Barracks. This build delays how fast you are able to get your hook, but even with the other build you still won't get the hook as fast as the Covenant. With this build, you can get Gunner Hogs by 2 minutes. This way, the Covenant will not have any Wraiths fielded yet. If you are able to field 2 Hogs plus the one you start with by 2 minutes, you can deny a Warehouse, and maybe even the Factory. Another good tip is to ram the Brute/Honor Guard/Suicide Grunt before it gets through the teleporter. To do this, you must time it impeccably. If they go Temple 1st (which they should), you need to get there by around 45 seconds into the game. However, if they don't queue up their special unit right away, the timing will be off and you'll have to wait at the teleporter. This is not optimal, as their leader can come back and destroy the Hog. This is why you have to be careful about camping the teleporter. If you manage to kill the unit, you will have delayed how fast they can get their hook and in turn hurt their economy. However, if they're playing as the Brute, they can ram your units as well. This is why it is recommended that you build Marines instead of Flamethrowers to capture the hook- you can grenade the enemy Chopper if it tries to ram you. Once you have the hook, Pelican a group of Flamers to take their hook. Even if you only manage to take control of it temporarily, the Covenant's economy is fairly weak at this point so you should do whatever you can to hurt it further. If they've built Wraiths, try to jack them with Spartans. If you manage to Jack one or two Wraiths, you'll be able to win the game early. However, if you can't, try to take down the Factory with Hogs in order to delay production. Once you have a good amount of Hogs, get Fortress and tech 2. Queue up Grenadier, as well as a Field Armory in order to get Reserves. Once again, you have the option to either get an expansion or get tech 3 and Gauss. If they continue building Wraiths, the best option is to stay on tech 2 for the time being and build Hornets. If you've managed to keep at least one of the hooks under your control, the Covenant player will have to cease production of units in order to hit tech 2 and build Vampires. Try to abuse this fact- save up for a D-bomb and timing push with your Hornets and Hogs. This will most likely end the game. However, if they stopped building Wraiths early and instead opted to build Banshees, anti-air turrets are a must. Also, get Wolverines out ASAP. If they push, you will be able to thin their numbers with your copious amount of anti-air. Then, a D-bomb push will most likely win you the game.

A battle rages on Chasms. 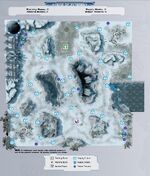 A strategic map of Chasms.
Add a photo to this gallery

Retrieved from "https://halo.fandom.com/wiki/Chasms?oldid=1789719"
Community content is available under CC-BY-SA unless otherwise noted.