Chiron TL-34 is a multiplayer map in Halo: Combat Evolved.

The level takes place in a part of the Chiron Test Station, which is a training ground for troops. Chiron TL-34 was designed to train those who were in close combat within Covenant ships, which feature narrow spaces, hence the enclosed hallways of that particular area of the training station. In addition to the narrow hallways of Chiron TL-34, the area also features a large number of teleporters, which became known as "warpers" to the troops who trained in Chiron TL-34;[verification needed] namely the Spartans, who frequently used Chiron as a training facility.

The teleporters were put there for strategic purposes, to give the Spartans the feeling of walking into a room blind to what was coming. This taught the Spartans to work as a team and think on the go. Chiron was designed so that a strategy that applied to one room would not apply to another, to keep the Spartans' mind working and alert. This knowledge seemed to come in handy on multiple occasions, especially on raids into Covenant ships.

Chiron TL-34 features the largest number of teleporters in all of the Halo trilogy multiplayer levels, with around 14 two-way teleporters on the map. Each teleporter sits at the end of a red hallway, while each red hallway connects to a larger room, some of which being split into hallways by walls in the center of the room. There are many places to hide and take cover in Chiron, so anybody passing through a room should keep alert. There are also a number of "blind" corners, allowing you to pop out on your enemy and catch them by surprise.

The standard-issue UNSC Shotgun and Flamethrower are quite effective on a number on enemy troops within the tight confines of this level. This level is also ideal for campers (people who stay in the same spot and wait for people to come to them to be killed), because of the numerous teleporters. A camper can simply pick any teleporter, stand in front of it, and wait for the prey to come through. Generally, they won't see what's coming and will be killed by the camper, before they even notice them. Setting the game type to heavy weapons also results in an interesting battle with large explosions in confined spaces. Chiron TL-34 tends to be a deadly "cramped" level. 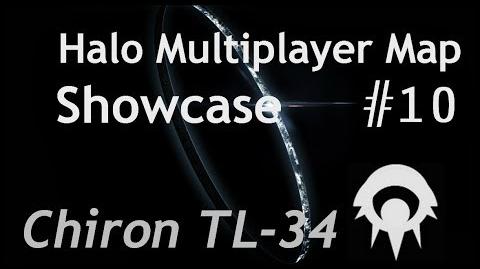 Retrieved from "https://halo.fandom.com/wiki/Chiron_TL-34?oldid=1786614"
Community content is available under CC-BY-SA unless otherwise noted.