“In the heart of this Forerunner structure, far above the troubled surface of the Ark, another battle rages.”
— Bungie

Citadel is a Halo 3 map that was released on September 22, 2009 with Halo 3: ODST, as a part of the Mythic map pack. The map is a section of the structure first seen in the Halo 3 multiplayer map Epitaph,[1] which is a Forerunner "cathedral" that towers over The Ark.

Citadel is based on the ground floor of the shield towers from the Halo 3 campaign level, The Covenant. It is built off of the geometry from the area around the elevators. There are differences in the geometry for multiplayer game play reasons, including the removal of the automatic doors and minor adjustments to the terrain.

The outside of the map is the same desert from Epitaph as it is a part of the same tower. However, the player cannot see the tower from the map as it blocks the view. The inside of the map is symmetrical, having identical bases and walkways, making it an ideal Team Slayer map. The textures of walls and floors resemble the textures of the walls and floors from Construct and The Covenant.

Citadel has a number of tight corridors and doorways, making grenade throwing much more frequent. The bases have two levels, with the top level accessible by a ramp or a nearby jump. The bases are also open, but still small, and have a wide open view over to the enemies base. 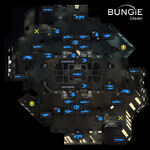 Battle in the center of the map.

An EVA clad Spartan waits behind a pillar.

Citadel, as viewed from outside via Pan Cam

The bottom of Citadel. 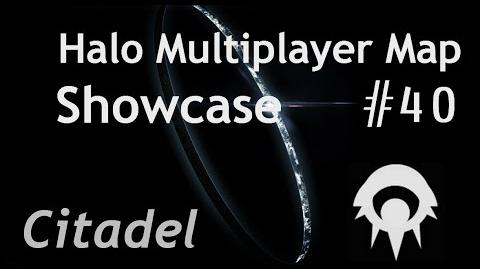