Coagulation, also known as War Games Map_Set/: 701-5[1] is a Halo 2 multiplayer map. The map consists of a large valley with identical bases at both ends. Coagulation is a remake of the Halo: Combat Evolved multiplayer map Blood Gulch.

Coagulation was remade in Halo 2: Anniversary as Bloodline.

There are two bases which are both identical in layout and the weapons that they contain. Each has a single main room which contains the flag and bomb in CTF matches and assault matches respectively as well as a newly added cellar level containing a Banshee and a Gravity Lift to the main room. The roof is also useful with a hole to drop into the main room, a teleporter, and a Sniper Rifle.

The first sniping spot is a small outcrop near the blue base, informally called the Sniper Ledge. The easiest way to get there is by using a Banshee to fly up there and then drop out of the Banshee on to the outcrop, but you can also use a Ghost's or a Spectre's speed boost to climb up the wall and on to the ledge. The ledge has a pillar on it so it is protected from the front, but is open to fire from the sides. There is another sniping spot on the wall left of the red base that you can also reach by a Banshee, a Spectre or a Ghost, but this is unprotected and is on a very steep angle. You can notice it because it is on a flatter angle then the wall surrounding it. There are some more good sniping spots in a bunch of rocks where an Active Camo is and around some trees where you are very well camouflaged (near the rocket ammo). A good game winning tactic is to use the Ghost to get to the rocket launcher, pick it up, and then use the Ghost so that nobody can use the rocket against you.

A panoramic view of Coagulation.

A Banshee in a base

Blue Team's base on Coagulation 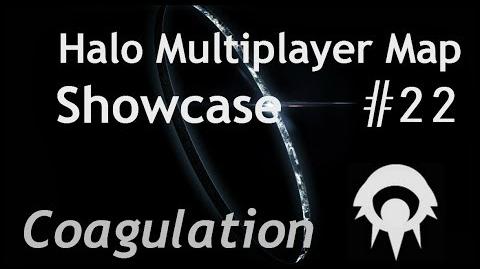