Coastal Highway is the tenth and final campaign level of Halo 3: ODST.

Completing this level on Normal or above unlocks the Coastal Highway achievement[1] as well as the map Last Exit on Firefight mode.

As the Battle of Mombasa enters its final stages, the Rookie, Buck, Dare, and Vergil fight their way to the city's Coastal Highway, where Dare and Vergil board an Olifant. Buck and the Rookie escort them along the Covenant-infested highway with various Warthogs and a Scorpion, hoping to reach the shipyards for extraction. However, a Scarab manages to cripple the Olifant, forcing the group to divert off the highway to a nearby building. There they fight off waves of Covenant until they are finally saved by the Phantom that they captured earlier. Reunited at last, Alpha-Nine leaves the wartorn city just as it is glassed by Assault Carriers and Battlecruisers.

Buck backs into elevator, removing his helmet. Dare, The Rookie, and the Huragok are already inside.

Dare punches Buck in the face.

Dare walks up to Buck and kisses him. Buck relaxes and puts his arms around Dare.

The Rookie and Vergil look awkwardly at Dare and Buck, then at each other.

Switch to the Rookie's perspective.

As Buck walks off the elevator, Dare teasingly looks back at the Rookie, before following Buck.

Buck and the Rookie come across a Covenant patrol, with a Deployable Lookout Tower and Plasma Cannons.

After all Covenant forces are killed.

Dare and Vergil come to them as they move down a small street.

They enter a building.

Once the Rookie reach the elevator:

Vergil powers on the switch.

The Rookie activates the switch, and they enter the elevator.

View of the Highway at dawn opens. Cut to Dare, The Rookie, Buck, and Vergil walking forward. Covenant Cruisers fly above. Dare points to one.

Buck takes off his helmet.

Vergil looks sad, and floats away.

The Rookie tries to motion to the two that Vergil is gone, but to no avail.

A cruiser jumps out of Slipspace attracting the attention of the squad.

Buck points to where Vergil was, then realizes he is gone.

Everyone looks around in panic, and then to the Olifant next to them. The hatch opens, and Vergil's tentacle appears. Vergil sounds the horn twice. Dare runs up to the Olifant.

Buck nods and moves out, as the Rookie cocks his head, as if trying to figure out wether or not Buck is serious.

If the Rookie stalls:

If the Rookie further stalls:

If the Rookie tries to walk away:

If the Rookie keeps walking:

The Rookie gets in the Warthog. He drives ahead of the Olifant, which is leaning off the main road.

The four run into a pack of Grunts. The Olifant is crushing the cars.

They fight their way down the highway. Next to a locked door is a flipped Warthog.

The Engineer opens the door after a few seconds.

The door leads to a small checkpoint. A second door opens up back to the highway, where a group of Jackals fire on the group. As the Olifant moves on, shields erupt around it.

Grunts and some Brutes protect the door up ahead, but the Rookie and Buck kill them. They head through the door.

The second door opens, revealing a lookout tower with a Grunt wielding a Fuel Rod Gun. A CCS-class Battlecruiser flies over them.

A huge air force of Banshees are seen ahead, but they're too far to be much of a threat.

The Olifant approaches the door, which opens. A whole swarm of Drones appear. Buck kills them.

Two Wraiths and some Covenant infantry fill up the highway, but the group speed past them to the door. The small group of Jackals and a Brute are defeated. Next to the door is another Warthog. Phantoms drop off reinforcements and fly away. Another Covenant cruiser flies over them. A group of Ghosts crowd around a crashed Phantom. The group defeat them and head to the door.

The Rookie drives, while Buck takes the Gauss Turret.

Upon reaching the next set of gates.

If the Rookie stalls

A CAS-class assault carrier appears from the clouds in the distance.

Once the Rookie drives through the next set of gates, the Assault Carrier begins charging its Energy projector.

After the next set of gates has been passed, the Carrier begins glassing the city in the distance.

As the trio proceeds, a Scarab jumps out of the water and begins to target the Olifant.

Vergil gives out a high-pitched wail.

The Scarab fires its main cannon at the Olifant, severely damaging it.

If The Rookie doesn't get out of the tank:

Buck and the Rookie takes out the two Grunts guarding the building.

The Rookie, Dare and Buck starts to fight off waves of Covenant troops. As the fourth Phantom approaches, two Wraiths on the highway open fire on their position.

The last Phantom drops off numerous Jump Pack Brutes and a Brute Chieftain. The trio defeats them. Mickey's captured Phantom flies into view, directly above the two Wraiths.

The two Wraiths are disabled. The Phantom hovers above the right parking lot.

If the Rookie stalls:

If the Rookie further stalls:

The Rookie secures the Phantom's landing zone. Dutch drops off from the dropship, and points his SMG at the Huragok.

The ground suddenly shakes as an Assault Carrier exits Slipspace dangerously close to the surface. It begins charging its Energy projector.

The Huragok sees the Assault Carrier, seems to panic, and refuses to move. Dare attempts to drag the Huragok to the Phantom.

Buck pushes the Huragok, until it and Dare are under the Phantom and pulled inside.

Buck pulls a piece of a Drone's wings out of his body suit, then crushes it with his hand.

The Assault Carrier begins glassing the area as the Phantom pulls out with everyone aboard.

Buck and the Rookie pull an injured Romeo from the Plasma Cannon to the center of the vessel.

The Rookie gives Romeo an injection.

Vergil floats to the controls.

Dare walks to the side of the ship to watch the carriers burn the city.

Dutch presses a control panel. The Phantom's sides close as it sets off for space, leaving multiple Covenant Assault Carriers and CCS-Class Battlecruisers to glass the city. As the camera zooms out, it reveals the Covenant ships uncovering the Portal.

One month after drop

{Veronica and a Marine walk down a passageway, the screen cuts the Marine's face from view.}

The Marine is revealed to be Sergeant Johnson.

The hatch opens, and the two walk into the interrogation room. Vergil is floating in the center, toying with an F99's Optics Package. Buck's squad is sitting or standing nearby. The Rookie is sleeping next to some stairs.

Johnson throws a lighter to the Huragok, who catches it.

The ODSTs arm their weapons.

Johnson walks right up to the Huragok.

Johnson sits down on a nearby crate.

Johnson puts a cigar in his mouth.

Easter Egg: At this point, if the right thumbstick is held left, one can see Buck with a Caveman which is sitting on a grating. Buck carefully picks something off the monkey (possibly a bug), and apparently proceeds to put it in his mouth.[2]

The Huragok lights Johnson's cigar, suggesting a deal. Johnson smiles, and the Huragok clicks the lighter off, and the screen blacks out with the lighter's click.

In the Superintendent's underground data center, many Huragok are looking around the area, as one looks behind to see the Prophet of Truth arriving from above, on his Gravity Throne. He examines the two Huragok behind him, who then leave. A large hole is shown, with a part of a Forerunner relic located underneath. Several Phantoms fly around in the area. The Prophet of Truth smiles and leaves. A Phantom is then seen moving towards the structure. 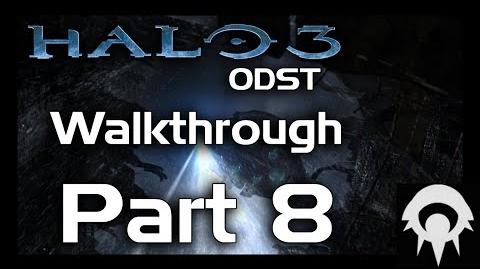