Colony is the name chosen by a pair of Mgalekgolo bond brothers, who served within the Banished as commander of all its Lekgolo forces on the Ark. Although it ultimately defers command to Atriox, Colony possesses its own intentions for the Ark, having covertly deployed forces to the resting location of the remaining Forerunner Keyships on the installation without the knowledge or consent of any of the other Banished leaders.[1] They serve as the main antagonists of Halo Wars 2: Operation: SPEARBREAKER.

Colony is usually tasked with controlling the forming of Lekgolo constructs that pilot vechicles and other specialized objects. Colony is also in charge of commanding the Lekgolo in banished battle operations on Installation 00. Though it may seem that Colony has unyielding loyalty to Atriox, Colony is known to operate on its own. It also prefer to do operations without informing his superiors and even Atriox.[1]

Since, the Enduring Conviction was destroyed by the counter-attack of the Sentinels on Installation 00. The Banished had no means of safe space and light travel, and so Colony was tasked of finding another ship for Atriox to use in his future plans. Colony then founded a Forerunner ship which had been categorized as a slender-like fighter. He then ordered Huragok to repair the ship to its 'former glory'. It is unknown what happened to Colony or the ship after this point.[2] 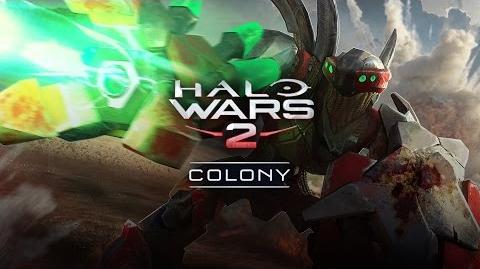 Retrieved from "https://halo.fandom.com/wiki/Colony?oldid=1813743"
Community content is available under CC-BY-SA unless otherwise noted.