The Commando Harness is a harness worn by Sangheili Commandos. It is converse to the UNSC MJOLNIR Armor, featuring a self-motivated recharging Energy Shield, and it is an Armor Permutation in Halo 3 Multiplayer.

This is the standard harness of the newly formed Commandos, (a branch of the Special Warfare Group) unit based upon pre-contact ground forces. The helmet features hardened communication gear and up-link capabilities, and the thoracic cage is streamlined for greater maneuverability in close environments. Lightweight construction materials and advanced internal components increase overall performance making the wearer more deadly in combat.[1]

Unlock: Earn the Overkill achievement in any ranked free-for-all playlist.
It is similar to the Assault Harness but is more smoothed and, unlike the Flight Harness it is more rounded than angular. Unlike the Assault Harness it features separate mandible guards. There is a small blue light on the forehead, one on the chin and one under each eye, which are also small blue lenses. The helmet also angles and slopes forward, giving the head a narrower appearance. The helmet also has a transparent neck guard with some aesthetic stripes down it's sides. This is the one of the rarest Sangheili helmets due to the high level of skill required to unlock it.

Unlock: Unlocked for all players in an update to Halo 3.[2]
The Shoulder Pauldrons for this armor model appear to be similar to the Combat Harness model, but more smooth and curved.

Unlock: Earn the Triple Kill achievement in any ranked free-for-all playlist.
The thoracic cage has a line of separation in the center, with a small, silver, half oval-shaped block protruding in the center. 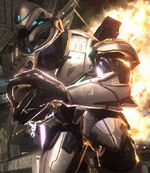 A Sangheili with the Commando Helmet.

The first sighting of the Commando Harness.
Add a photo to this gallery

Retrieved from "https://halo.fandom.com/wiki/Commando_Harness?oldid=1789848"
Community content is available under CC-BY-SA unless otherwise noted.