Complex, also known as War Games Map_Set/: 615-3,[1] is a multiplayer map in Halo 4. It is set on a science detachment which has been optimized to meet ONI specs for defensive emergencies.[2]

Complex is an asymmetrical map, which has may structures that can be used to get around. Red Team spawns on the darker side of the map (to the left when looking from the cliff edge), and Blue Team spawns on the lighter side of the map (to the right when looking from the cliff edge). Immediately to the right of Red Team's spawn is the 'Lift Room', which has two gravity lifts that take the player to the second level. To the left of Red Team's spawn is the 'Warehouse', which is a two-tiered structure. Immediately behind the spawn is Red Team's Sniper Rifle. When moving to the right, the player will come across a rock ledge, going past this will lead to the Scattershot spawn. Moving past this area will lead to the 'Helipad' and Blue Team's spawn. To the right of Blue Team's spawn is the 'Garage', and moving past this structure and along the cliff edge will lead the player past 'Computer Room' and to the 'Warehouse'. The inner area of the map mostly comprises structures including the 'Lift Room', 'Computer Room', and the 'Factory'. When going left from the lift room towards the Blue Team spawn, the player will come across Computer Room, and turning right again from the Computer Room will lead to player to the 'Factory'. Going along this route will lead the player back to the 'Lift Room'. The 'Factory' is a two-tiered, large structure which is mostly symmetrical. It has a ramp leading to second level from the inside of the first level. The second level comprises two corridors towards the outside and a large area towards the inside. In front of the 'Factory', towards the cliff edge is where the Energy Sword spawns.

During Flood, the center building and one of the towers near the shore is where people hold out during Flood since it has a great vantage point and there are a lot of choke points for the Flood to funnel through. This also makes it a good idea to wait for survivors near this point and eliminate them as they come. 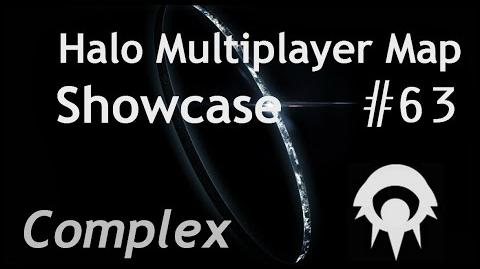 Three Spartan-IV's preparing for battle, in a War Games simulation, on the map Complex.

A building high view of the map Complex.

A ground side view of the map Complex.

A Flood game-type being played on the map Complex .

A Flood Combat Form attacks a SPARTAN-IV in a War Games simulation.

A Flood Combat Form prepares to attack a SPARTAN.

The map's callouts.
Add a photo to this gallery

Retrieved from "https://halo.fandom.com/wiki/Complex?oldid=1789863"
Community content is available under CC-BY-SA unless otherwise noted.