Construct is a Halo 3 multiplayer map that takes place at one of The Ark's "spokes." Its large asymmetric design makes it great for Slayer and Team Slayer gametypes.

The map is Forerunner in nature, set similarly to the Cartographer on The Ark. Overlooking a giant ocean and a waterfall, with much of the Ark visible in the distance, this level may appear symmetrical, but on closer inspection is really asymmetrical in nature. Construct has three distinct levels, each connected by a series of ramps and gravity lifts. As a result of its unique nature, Construct has a variety of weapons and equipment. The upper level can be reached by the main yellow gravity lift at the far side of the level (opposite the ocean) and two smaller, purple lifts. Also, two ramps extending up to hold the sword arm can be used to gain access to the upper level. A long, narrow channel stretches out overlooking the vast ocean below and the main level of the construct.

A Flamethrower is present at this intersection. A small, c-shaped hallway connects the main corridor to the smaller corridor, which goes behind the purple gravity lifts. A Mauler can be found in each of these small hallways. Players also have the ability of reaching the top level via the yellow and purple gravity lifts from this low level.

The middle level is almost synchronous with the lowest level due to the ramps connecting these two levels. A portion of the middle level has been removed, offering a quick drop into the lowest level if a player chooses to not use the ramps. Players can also access the yellow and purple gravity lifts from this level of the map as well. This is the highest level of the map where the gravity lifts can be used, as they only travel upwards.

This level of the map, can often see fighting, but is mainly used as the "transport" level, getting players to their destination quicker. Players can also choose a slower and possibly safer route than the gravity lifts by traveling up the ramps. The main ramps circle around the yellow gravity lift and lead all the way to the top level. The map's second Brute Shot spawn lies on these ramps. There is also a way to get over the purple beams without dying. This tip will be a great tip for escaping enemies and killing them from a high view. First you must jump to a small edge and jump on the bigger edge above it. Then you must jump over the purple beam or power jump.

Note: An alternate route to the Energy Sword is a long narrow sloped ramp (which is quite possibly a support strut) next to both of the purple lifts on this section of Construct, it leads to the sides of the ramp that leads to the large walkway that leads to the Sword.

Remarkably, this area of the map sees practically all the action that takes place. This is for several reasons: first, there is little to no areas for cover on the lower levels. Second, nearly the entire supply of weapons is located here, and third, the three power lifts lead to here and it is often of good strategy to camp at the top of these lifts in hopes of killing a player as he comes up it (in such a situation the player already there has a distinct advantage over the player coming up the lift). There are three main areas of the upper level as well. The "yellow lift zone" contains the area where players exit the yellow gravity lift, as well as the paths leading to the purple lift zones. The second zones on the upper level are the "purple lift zones," which occur at two ends of the top level. The final aspect of the upper level is the long walkway extending into and outside the main parts of the map, containing the Sniper Rifle at one end and the Energy Sword on the other.

In this zone, players can trap the opposing team from entering the top level of the structure via the yellow gravity lift or the ramps. It is often the object of much fighting as one team tries to storm the upper level, while the other team attempts to hold them off. A good tactic for those traveling up the lift is to destroy the fusion cores that are on the walls of each side of the yellow zone. On the left of players, as they're looking into the lift, are the ramps that lead up to the top level from the bottom. This is by far the most sought after position in the entire level. The purple lifts provide two ways to assault the yellow lift zone from either side but it is possible to defend this zone if the players stick one or both of the two following areas:

Players can rapidly travel up to the top level via one of the two purple lifts. These zones can also be a death-trap for players traveling up them. A helpful trick is to toss grenades up the lifts. Although, this can be difficult to achieve. Hopefully, this will soften up the players, making it easier to then travel up the lift to kill them. Other than the ramps, this is the only way to reach this section of the top level. Despite being a heavily contested area, if player can effectively coordinate an assault, they can take the upper level with minimal casualties. If exploding barrels are at the lower lift entrance, it is normally a good strategy to push them up the lift and follow up with a grenade or two to kill any players hiding in wait.

This narrow walkway extends out over the level looking out into the vast ocean below, and has two levels. Players can find an Energy Sword and Power Drain at one end of this walkway. Players can easily access the middle or lower levels of the map by jumping from the edge of this walkway. There are two very narrow support struts that allow climbing up and down. At the opposite end of this walkway, players can find the Sniper Rifle (upper portion), and a Bubble Shield (lower portion). In the middle area, a player can get a Brute Shot and shoot up the wall and get on top of the archway towards the plasma grenades and Sniper Rifle. This is a good idea if you have the Sniper Rifle with you.

Construct has been slightly altered for Matchmaking. As of the December 11, 2007 update, the Maulers that spawned at the top of the purple lifts have been removed. Hiding spots, such as the one below the level near the orange lift and the spot behind the glass, have also been removed by invisible barriers that cause players to fall below. 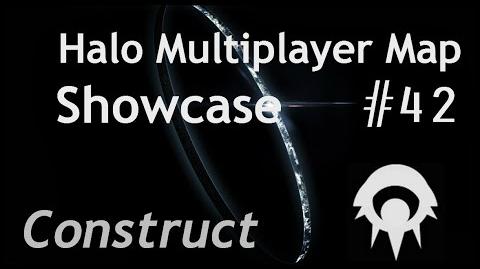 Retrieved from "https://halo.fandom.com/wiki/Construct_(level)?oldid=1789874"
Community content is available under CC-BY-SA unless otherwise noted.