Containment, also known as War Games Map_Set/: 639-1[1] is a Halo 2 multiplayer map. It was added to Halo 2 in the Bonus map pack. It is sometimes referred to as the map "That's so big, it won't fit into the Xbox."

"Containment" was based on the Sentinel Wall of the campaign level Sacred Icon.[2] It is a large outdoor symmetrical map that is a "biological airlock"[3] between the Flood-infected zones of Delta Halo and the "clean" zones patrolled by Forerunner Sentinels. It is set in a fault between two snowy cliffs, and there are two massive Forerunner fortresses on either side of the map, acting as bases and also the barricades meant to defend against the Flood.

It is similar to Coagulation, in the sense that it's an open, hilly terrain, as well as being a big Snipers map. On each side is an old Forerunner ruin, acting each as a base. Each base, red and blue, has a large gate (resembling a ramp, and functioning as one until opened). About 300 feet from it, is a panel that opens each. This is used to get an inside, as you can go around through the caves, or you can jump the ledge without a vehicle. There are two fully functional gate switches and opening gates. There are two Warthogs, two Scorpions, and two Banshees by default spawning. It is ideal for large, system link games or even Xbox Live games, about 6-16 people. Any number less than six players could result in a slow match.

The level may also remind you of the classic multiplayer level from Halo: Combat Evolved, "Sidewinder," being set in the snow and having a blue and red base. However, this map is very different from Sidewinder and is not a Sidewinder remake. It was originally intended to be a remake of the Halo PC map, Timberland. The map has many similarities to Battle Creek in the first area, as each end has a complex base with many levels, and is set in a valley with alternate base entrances and teleporters, though of course on a far larger scale.

A birds eye view of Containment.

A battle on Containment in Halo 2's alpha stage.

A multiplayer match on Containment.
Add a photo to this gallery 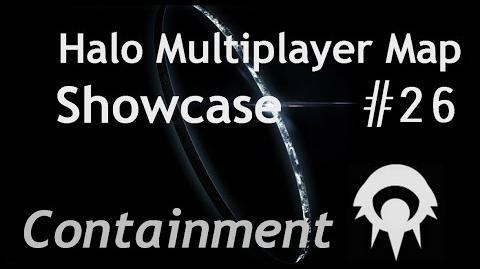 Retrieved from "https://halo.fandom.com/wiki/Containment?oldid=1789881"
Community content is available under CC-BY-SA unless otherwise noted.