This page is about the level. For the AI, see Cortana.

The Raid on High Charity

Cortana is the ninth and penultimate campaign level of Halo 3. It takes place in the Flood infested High Charity. Your mission is to find Cortana in order to activate Installation 08.

John-117 flies a Banshee to High Charity. He finds an opening into the hive. (In co-op, Thel 'Vadam will follow John and land his Banshee next to the Spartan's Banshee)

(Co-op Change) Johnson (COM): "The Shipmaster will do the same with the Elites."

John shakes off some organic material that is stuck to his boot.

John drops down a Porta.

As John goes deeper into the hive.

In the large room where the Tilt skull is located, a Terminal can be activated, but does not count towards the Marathon Man achievement. If activated, it displays another Cortana Moment.

As John nears a large room (with the route to the reactor room at the top):

John continues to the reactor room.

The image of Cortana suddenly turns a tinge of green. She clutches her head and writhes in pain.

John enters the reactor room, passing by bones and skulls back at the entrance.

John finds a door out of the reactor room, and follows it.

John begins to reach the end of the hallway.

John rushes to the end of the hallway, to find Cortana lying prone in a Stasis Field in a center podium. The room resembles the Sanctum of the Hierarchs. He beats and bashes the shield until it finally fails.

Master Chief leans closer towards the panel Cortana's on. The AI lies pitifully on the podium, pain and shame on her face. The animated code that usually flows across her skin is absent.

John kneels right next to Cortana.

She looks up at John. Cortana starts to glow.

Cortana slowly gets up. As she does, she begins to glow more brightly, and the lines of code and equations once again begin to fall over her surface. She opens her palm and a hologram of the Index appears above it.

John gets back up on his feet.

John takes Cortana's old data chip out of his helmet and holds it in front of her. Cortana touches its core and uploads herself into the chip, and John inserts Cortana back, at long last, into his armor.

Shoot your way out.

If John continues to stay in the room Cortana was in.

John heads back up the hallway.

John-117 makes it back into the reactor room.

The Flood begin to swarm the reactor room, realizing John's plan. However, he successfully destroys all three reactor pylons.

If John takes too long:

Cortana: "Corridors ahead have all collapsed. I'll find another way, Chief; be careful."

John finds his way back when...

Chief and Cortana find The Arbiter battling Flood with a Flamethrower. John assists.

John-117 and The Arbiter find a Pelican, possibly from In Amber Clad, nearby and board it. John uploads Cortana into the Pelican's holotank and starts up the engines. One of the Gravemind's tentacles advances to the Dropship, but the heat from the thrust forces it to retreat. The Pelican takes off, smoke pouring lightly from the left engine. The tentacle comes back and tries to wrap around the Dropship, but John escapes its grip. The Pelican barely escapes from a massive explosion caused by the reactor going critical as High Charity is finally destroyed, and the Pelican makes its way to the new Halo ring. 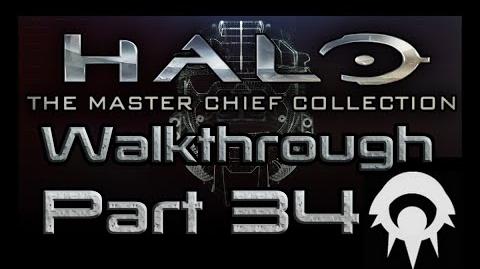 A map of the level.

The first chamber in High Charity.