Set on Shield 0459, the map is dominated by various Flood biomass accretions in Coordinated Stage. The map has four Forerunner Bonus Reactors that can be claimed by garrisoning infantry inside them. 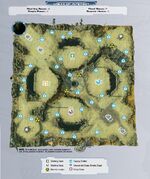 A strategic map of Crevice.
Add a photo to this gallery

Retrieved from "https://halo.fandom.com/wiki/Crevice?oldid=1789975"
Community content is available under CC-BY-SA unless otherwise noted.